AdWords has been largely unrivaled since they began but that’s slated to change this year. According to PPC experts featured in our 2018 Digital Predictions, Bing Ads are going to be better than ever this year and may even catch up to AdWords in terms of functionality. With more competitive results, more users, better features and ongoing innovations, Bing is officially stepping up their 2018 game in a big way.

Bing is really good at building an audience to attract advertisers and they’ve done a lot of ground work to get to where they are today. Last year we reported that Bing made up ⅓ of the US search market share (that’s 160 million unique US users), over 20% in the UK and more than 10% in five other markets globally. Bing comes preloaded on all Microsoft computers as the default search engine and partners with major online players like Yahoo, Kindle and Siri. Most recently Microsoft acquired LinkedIn, again building a more attractive advertising playing field and capturing even more audience.

Did we mention Bing is bigger than you think ????? #SEM #PPC #bingadswebcast pic.twitter.com/jeJxJGcxl5

Lisa Raehsler, Founder and SEM Strategy Consultant of Big Click Co., stated in her predictions that Bing is continuing its growing trend in 2018. She points out what makes Bing’s audience unique and why that’s good news for advertisers. “Given that Bing audiences spend more [money] online than the average Internet user, advertisers will see better CPAs that are hard to resist if they have not already been using Bing Ads. A much larger percentage of budgets will be allocated to Bing Ads…”

Bing is slowly creating a recipe for advertising success and it’s nearly perfected. Between a growing market share, new channels for advertising and a captive audience, there’s a lot to like. But it doesn’t stop there.

Bing is both buying and building better tools for advertisers. LinkedIn was the most recent acquisition by Microsoft in late 2016 and since then it’s already become a superior product than it was previously for advertisers. Lisa Raehsler stated in her predictions that, “In-line with the industry trends in audiences development, LinkedIn has rolled out company and email contact matching along with a remarketing feature…” While LinkedIn is extremely interesting to paid media professionals, especially anyone marketing for B2B, Bing is the real contender next to AdWords.

David Szetela, the Owner and CEO of FMB Media, predicted that with all of Bing’s recent innovation, this will be the year that Microsoft’s advertising platform parallels Google’s AdWords platform. He thinks “Features like ad extensions, RLSAs, and eCPC automated bidding” are just some of the ways that Bing is competing with AdWords and he expects to see a lot more on the way.

“For example, fans of bid automation will see goodies like automatic maximization of conversions, where an algorithm delivers as many conversions as possible for any given budget. Another example of AI-backed functionality will be automated bidding whereby the advertiser sets a target CPA and Bing Ads delivers as many conversions as possible whose CPA is at or below the target. Bing Ads’ Opportunities section will undergo a machine-learning fueled facelift. Expect more-precise bid suggestions, and recommendations for Sitelinks, for example.”

While David doesn’t expect that Bing Ads will actually surpass Google in 2018, he does believe that new features and functions will make it a key part of the advertisers toolkit.

Look Back Before Looking Forward

David based his predictions off over a decade of innovation on Microsoft’s part, and we all know the value of using past data to make future decisions! He rightly pointed out past Microsoft trends where they won the innovation war, as an indicator of what’s to come…or at least what we should expect from a company as large and capable as theirs.

“I’ve been watching Microsoft for many years, starting long before they had won the wars for dominance in PC operating systems and office applications. Does anyone remember IBM’s OS/2? How about the king of spreadsheets VisiCalc, or the once-dominant WordPerfect?

All of them now dinosaurs, relegated to the back pages of Wikipedia. In case after case, Microsoft prevailed by doggedly creating version after version, feature after feature, until they had simply out-developed all competitors.

BingAds started life as Microsoft adCenter in 2004, and on release it was nearly as ugly as Windows 1.0. It was already several generations behind AdWords and Yahoo Search Marketing (the much-heralded Panama version). But Microsoft has applied its usual software development patience and persistence. Year after year they added functionality that brought Bing Ads closer and closer to parity with AdWords.”

If Microsoft has come out on top of every past innovation challenge, advertisers should expect the race to get even closer this year.

Click here to get all the insights from this year’s Digital Marketing and Paid Media Predictions videos and eBook. 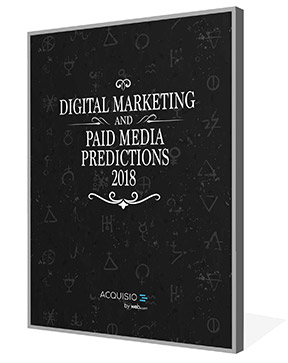