The Best Time to Advertise by Industry

The industries included in the study are as follows:

Animal care and service ranges from dog walkers to pet stores and groomers. Anyone advertising on behalf of our furry friends should know that impressions and clicks peak early in the week on Monday and Tuesday. Don’t get ahead of yourself though, it seems that while people are browsing early in the week for pet products and services, they are waiting until the weekend to buy. The click-through-rate was 15% better on the weekend. Impressions and clicks are 20% higher Monday and Tuesday than the weekend, but CPC was 10% better and CTR was 15% better on the weekend.

There’s no sure fire way to predict when your car is going to fail, so presumably there would be no rhyme or reason to the time of day that people search for auto repair or auto dealers. But even though car repair and sales could occur spontaneously, impression volume is higher on Monday and Tuesday and lower on the weekend – but only by about 7%. CPC was 9% lower on Sunday than on Wednesday. Saturday is the best day to advertise when people are searching for cars and auto related services most, and click through rate was highest.

From nail salons to landscapers, service professionals populate the small business work force we all rely on. SMBs have a lot to gain from advertising, but often don’t have a huge budget. Knowing what time of day will get the most clicks can help service professionals spend their budget during the most advantageous periods.

Contractors and service professionals should note that impressions and clicks peak Monday and Tuesday. There is a 20% drop off by the weekend though. As a result CPC drops 25% on the weekends, but remains mostly constant during the week. That means it’s cheaper to advertise on the weekends, because there are less people looking for and clicking on ads for contractors, personal and professional services. CPA is lowest on Sunday and jumps by 40% on Monday.

The education and employment sector is helping to develop and nurture a skilled workforce. Businesses and institutions that comprise this industry are trying to attract more individuals to higher learning and career growth. With such a noble mission it would only be fair to give them a little advertising advantage.

Anyone working in the education and employment sector can try prioritizing ads deployment and budget allocation when clicks and impressions peak on Tuesdays. Clicks and impression drop by 20% between Tuesday and the weekend. However the cost per click coincides, being 20% higher on the weekdays than on weekends.  CPA is lowest on the weekend but it doesn’t mean it will drive more traffic than Tuesday or other days during the week.

Nobody knows how to make money better than the financial sector. However, with a little fine tuning, everyone can add a little optimization to their campaigns by advertising when it counts. Clicks and impressions peak early in the week and experience a significant decline by the weekend, as much as 20%. The CPA and the CPC drop 30 – 40% on the weekend as well, but again a better price to advertise doesn’t mean more conversions.

The fitness and recreation industry data was slightly off trend in that CPC and CPA were steady throughout the week. While the highest impression and click volume is on Monday, the lowest clicks were Friday and the lowest impressions were Saturday, but only by about 15% from the peak earlier in the week. Though it’s pretty steady, people are searching for ways to get healthy more on Mondays, while weekends are still sacred for a little R&R. 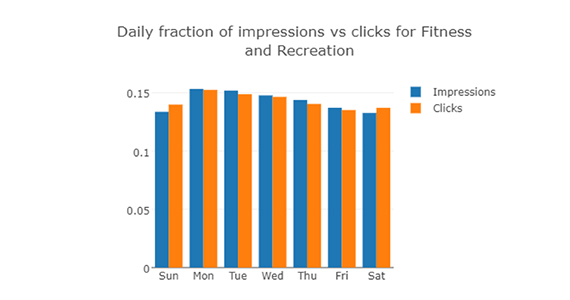 The food and beverage industry is composed of bakeries, coffee shops, brewpubs, bars, restaurants and other businesses serving delicious delights. It was surprising to observe that within the food and beverage industry, impression and click volume were highest between Monday and Wednesday, 25% up from the weekend. Alongside the drop in traffic on the weekend was the drop in cost by about 15% for CPC and 30% for CPA. Perhaps people search for the coffee shops and restaurants they’ll visit during the week and are enjoying the fruits of their labour by the time the weekend comes, rather than spending time online.

Similar to unexpected car repairs, you just never know when you’ll need a good lawyer. However some legal advice is basic and people often seek this information online to know how to react to different types of legal matters. Within this industry there was a dramatic difference in the amount of daily impression and click volume between weekdays and weekends, with Monday being 50% up from Sunday.

People want to enjoy their free time on the weekend rather than going to doctors and dentists. Similarly many health practitioners only practice during regular business hours. As a result, the impression and click volume goes down by about 15-20% on the weekend from the weekday high on Monday in the medical and dental industry. However, CPC and CPA are 15% lower on weekends.

While many people may research houses during the week, they’re typically booking visits for the weekend or looking for Sunday open houses. As a result impression and click volumes peak on Monday in the real estate industry and drop by 10-15% by the weekend, but the CTR is about 10% higher on the weekend than on Wednesday.

The retail industry doesn’t just mean fashion and clothing stores, it actually refers to anyone selling consumer goods, like carpets, bedding or even electronics retailers like Best Buy. Like other industries reported here, impressions and clicks are highest on Monday, dropping 10-15% by the weekend, but CPC and CPA are 20% lower on the weekend.

The tech industry in our database is made up of software companies and manufacturers. For this industry, impressions and clicks peak on Monday and drop about 15-20% by the weekend. The CPC is 10% lower and CPA is 20% lower on the weekend.

People daydream about travel and tourism more during the week, but only by about 15%. While Saturday had 15% less clicks and impressions than Monday, CPC and CPA were stable. Therefore anyone running PPC ads for the travel and tourism industry will likely get more conversions Monday and Tuesday, but won’t get a discount no matter when they advertise. 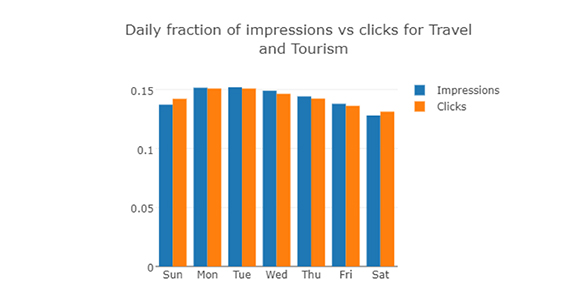 Bringing the Best Time to Advertise Into the Balance

Across many industries there was an overall trend that advertising during the week is more advantageous, with more people searching, viewing and clicking on ads. Similarly the weekend was commonly a time when there was less clicks and impressions across almost all the industries included, except in the fitness and recreation, automotive and real estate sectors. That makes sense considering people tend to do things like look at houses more on the weekend. For most other industries though, prioritizing ads earlier in the week than over the weekend is a good idea.

Though clicks and conversions are always the goal, the cost of advertising is always a consideration and sometimes a deciding factor. From a budget perspective, advertising when the cost is the lowest seems the most logical, when in fact the cost is the lowest because there is the least opportunity in this time frame, among other factors. As we observed across many industries, the worst time of day to advertise was often the cheapest. That said, while there was less traffic often on weekends, it’s important to note that across all industries there was some traffic. So your competitors may be prioritizing the weekdays when traffic and clicks are highest, leaving the weekend open to you to advertise with less competition and cheaper prices.

With these variables in mind, it’s important that campaign managers and PPC analysts test running campaigns at both the best and worst times to advertise for their industry to see the ROI of both. We suspect though that without machine learning running the bid and budget management, allocating ad spend to the times of day when there are the most clicks and impressions for your industry can be time consuming. To save time, while getting the best time-of-day performance, consider the valuable asset of applying machine learning to your next campaign!

All graphics were created by Acquisio.