Amazon RTB May Be Right Around The Corner 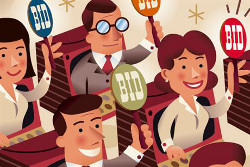 Amazon is an innovator. Love them, like them, or hate them, the online retail giant has implemented some of the most successful sales measures in the history of online retail, and it looks like they may be adding RTB to the list. Amazon knows a lot about its customers. Amazon knows what people have purchased, and shows them things that were purchased by people who purchased that very same thing, but along with, oh look, these other things, and wouldn’t you also be interested in them? Turns out that people are interested in those other things.

According to Alexa, Amazon.com has a bounce rate of approximately 26%. So, let’s call that pretty good. One might think, on the surface, that they’re doing extremely well. Why wouldn’t they be? However, they did post an operating loss of $28 million in Q3 of this year, which they blamed on a bad investment in Living Social, and “good will.” Be that as it may, any company posting a loss is bound to have to look for means of creating revenue, and Amazon may have found a winner. In fact, they have been working on this for a while, according to this article. From the same article, “as early as the first quarter of 2013 it will introduce a self-serve real-time bidding platform for media buyers, including agency trading desks, which will be able to use the platform to manage their own buys, according to multiple sources with knowledge of Amazon’s plans.” None of this has been confirmed by Amazon, as they appear to opt for that reality in which nothing is actually happening until it’s actually happening. So, we’ll have to wait for the real details. But, until then, we can probably go ahead and jump for joy at one more opportunity to target customers in a meaningful way. We have already seen the success of the Facebook Exchange this year, and even early on it was starting to look good. The name of the game for marketers is engagement, and, at the end of the day, it is for consumers as well. Much of the resistance to online advertising, or advertising in general, comes from consumers having to see ads that they really don’t care about. In fact, consumers seem to be pretty okay with the whole thing. Advertisers want to be where their customers are, and consumers want to purchase things online. Percentage of Internet users who made a purchase online in 2012? 83%. The Amazon RTB offering could go a long way towards leveraging the information that Amazon has on their customers, and allowing marketers to tap into that could be a boon for both Amazon and the advertisers. And, if it’s done well, to the people who are making purchases online, as well.