The Most Popular Canadian Sports Teams, According to Google

Google keyword search data informs marketing campaigns and is also extremely entertaining as a reflection of our society and indicator of cultural trends like sports. Over the years sports coverage has increasingly included analytics to tell a data-driven story. Last year, due to the popularity of the Chicago Cubs after their World Series win, I put together a post about their popularity. Acquisio liked the post so much they invited me to put together a similar post featuring Canada’s wildly successful sports teams – how could I resist?

I wanted to uncover who are the most popular professional sports teams in Canada. How do all seven Canadian NHL teams rank in popularity amongst each other? And how do they rank compared to the country’s lone MLB and NBA teams, the Toronto Blue Jays and Toronto Raptors? How often are Canadians searching for each franchise in Google?

The answers to these questions are below to inspire you, anger you or even help your next hockey pool. Sports fans get ready for search insights!

Who Are The Most Popular Professional Sports Teams in Canada?

To see how popular each Canadian professional team is, I used Google’s Keyword Planner. Here, I took data from the past 12 months, which gives me a monthly average on how many times each franchise is searched in Google. This ensures seasonality doesn’t affect the results of the data.

In the graphic below, you can see how each team stacked up: 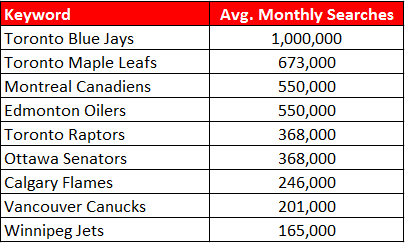 Now, hockey may be Canada’s game, but it’s the country’s lone baseball team – the Blue Jays – that dominate the search results. And it’s really not even close, as the Blue Jays have an average of one million monthly searches.

In the end, maybe it really shouldn’t come as much of a surprise, as the Jays are Canada’s team, while the hockey fandoms are split. In fact, Blue Jays fans annually invade Seattle’s Safeco Field when Toronto visits the Mariners. It also doesn’t hurt that the Jays have enjoyed a nice revival recently, having participated in the American League Championship Series the past two seasons.

We made plenty of great memories in Seattle, but this one ranks at the top of the list. #LetsRise ???????? pic.twitter.com/30eW13AtG4

How Do Canadian NHL Teams Rank in Popularity Amongst Each Other?

I’ve believed in the Toronto Maple Leafs my entire life. The least you could do is believe in yourself. https://t.co/Lsv7r2g0Wm

How Does Canada’s NHL Teams Rank Compared to the Lone MLB and NBA Teams?

Canada’s lone NBA club, the Raptors, are next and the list is rounded out by the Ottawa Senators (368,000 average monthly searches), Calgary Flames (246,000), Vancouver Canucks (201,000) and the smallest Canadian market with a professional team, Winnipeg and the Jets, at 165,000.

The question is, how much of this is due to recency bias? How has the popularity of the country’s teams changed over the years? The Blue Jays have been successful the past few years. The popularity of the hockey teams most likely had something to do with success, as the Maple Leafs, Canadiens, Oilers, Senators and Flames were all part of the NHL’s Stanley Cup Playoffs in 2017.

The First Round of the 2017 #StanleyCup Playoffs. pic.twitter.com/NXJvv5nAu2

How Does This Analysis Compare to Past Results?

To dig deeper, I went and looked at average monthly search volume from 2014. As you can see in the graphic below, the Blue Jays weren’t anywhere near as popular just three years ago. It’s understandable, as the franchise was in the middle of what was the longest playoff drought in baseball at the time. 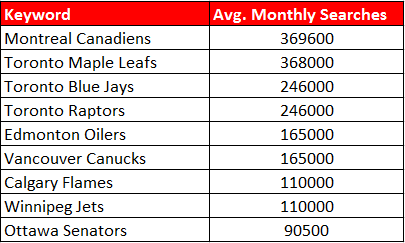 The Canadiens were the nation’s most popular NHL team back then, with a slight edge over the Leafs, meaning the country’s two largest cities had the most popular teams with Toronto teams holding three of the top four spots.

The smaller Canadian markets like Ottawa and Winnipeg round out the list. Those smaller market teams have all seen their search volume rise as well, notably the Edmonton Oilers, who had their own streak of futility. Edmonton last made the Stanley Cup Playoffs in 2006 before earning a playoff appearance in 2017. Ottawa and Calgary made playoff appearances as well, with the Senators making it all the way to Game 7 of the Eastern Conference Finals.

There are a number of ways to determine a franchise’s popularity – attendance and TV ratings are two factors. However, with the number of people that use the internet these days, determining the amount of times someone is looking for a team via Google is a perfect way to determine their popularity.

While Canada is a hockey nation, it’s a baseball team that, at the moment, holds the title of most popular team in the country.