AI and Bid Modifiers: When It Works and When It Doesn’t

Bid adjustments, also known as bid modifiers, allow you to move your bid values up or down depending on circumstances that you choose. Technically they are percentages by which the base bid is modified, but that doesn’t roll off the tongue in quite the same way.

Now let’s imagine an online florist serving the south Louisiana region that notices orders from in and around the town of Lafayette bring in higher average profits than orders from any other area. They might use bid modifiers to increase the bid amount on ads that display to users in those locations, deeming it worth the extra expenditure to appear more in front of consumers who are more likely to drive higher profits.

You can set bid modifiers at the campaign or ad group level to target a range of situations, including:

Bid modifiers are an optional tool in both Google Ads and Bing Ads, but they aren’t something you necessarily want to use all the time. For example, they don’t always work well with AI-based bidding, and if you start stacking too many modifiers together, it can result in unintended consequences for the cost of ads or the exposure you achieve.

In some cases, bid modifiers can be extremely powerful tools for managing your ad budget while honing in on a targeted audience. Bid modifiers work best when you’re targeting store hours, a certain region, gender or an audience with specific interest.

If you have a local storefront, you can use bid modifiers to target local users when you’re open, increasing the likelihood that someone will visit your business during that time.

Search marketing statistics already show that online interactions turn into physical ones: around 75 percent of local mobile searches convert into a visit to physical locations.

Bid modifiers combined with ad scheduling helps you appear to mobile users at the right times, taking advantage of this same phenomenon to drive foot traffic to your location. Not to mention it saves money on clicks while you’re closed!

Targeting hours you’re open also funnels calls and other methods of contact into your business at the most opportune times.

Some businesses also use hour modifiers to increase ad exposure during optimal times for specific marketing campaigns when the biggest spenders who are most likely to convert are online.

One of the benefits of using bid modifiers like this is that you can increase the likelihood of ads appearing within certain scenarios without completely excluding other scenarios. After all, you may still want to appear in ads even when your place of business isn’t open (to a relevant audience, of course).

Targeting Audiences in a Certain Region

You can also use bid modifiers to target audiences in certain regions for the purpose of driving up clicks (traffic), which can potentially drive the number of conversions (and revenue), provided the traffic is relevant and the path to conversion is straightforward. The Louisiana florist illustration above is an example of using bid modifiers by region.

Again, bid modifiers come in extra handy when you want to increase ad exposure to people in a certain area without excluding all other areas. On the other hand, bid modifiers can also be used to stop ads from appearing in regions, such a situation where an advertiser legally can’t operate in a specific geographic pocket.

You can set bid modifiers by a variety of demographics, including gender, age and whether someone is a parent. Because bid modifiers tend to work best in the simplest cases, they can be a powerful marketing tool for campaigns that you want to target by gender.

One way to do this is by incorporating negative modifiers to reduce the cost of ads displayed to genders that aren’t your primary target. For example, if you’re targeting something primarily to a female audience, you can set the bid modifier low in Google or Bing for the male demographic. The result is that you don’t totally exclude men from your campaign, but you put an onus on having your ads displayed to users who the network believes are female.

Reasons to use bid modifiers in this way include:

As in the other best use cases in this section, interest-based bid modification lets you control roughly how much you spend to target certain audiences. For example, a company with a sports video game coming out may want to heavily target gamers. They might also want to target sports enthusiasts to a lesser degree, assuming that fans may be interested in the game but are less of a “sure thing” than current hardcore gamers.

When Should You Leave Bid Modifiers Out?

Now that you know where bid modifiers come in handy, when should you leave them out of the equation?

First, if your equation is getting a bit too complicated, you might want to scrap some or all of your modifiers. You might think “I’d like to target women who live in a certain area who are also moms who make a certain amount of money and like Lilly Pulitzer clothing.”

It’s not impossible to dig down deep with bid modifiers, but you can get some unintended results if you don’t know exactly what you’re doing. Because the modifiers are all multiplied across each other, you can end up with a bid that’s much higher (or much lower) than you planned. And if you mix positive and negative modifications, you might simply cancel out any impact you planned to have.

Another time to leave bid modifiers out is when you already have AI-bidding turned on with third-party providers. Modifiers can work within Google and Bing Ads AI, but in the case of Target CPA automated bidding, where the CPA is modified rather than the bid, even Google says it’s best to stick with no bid modifiers at all.

Bid modifiers also tend to confuse the machine learning in other programs and cause some clicks to cost more than others without a good explanation — it’s unclear whether the third-party AI causes the cost changes or the combination of third-party AI and bid modifiers, making it safer to leave modifiers out.

Using Bid Modifiers at the Right Time is Key

Bid modifiers can boost your PPC success, but you have to know when to use them. Start with simple modifications that fall within some of the best use cases above and work your way into more complex scenarios (while avoiding modifiers if third-party AI-bidding is turned on).

Are you ready to harness the potential of automated bidding?

Get Your Copy Now 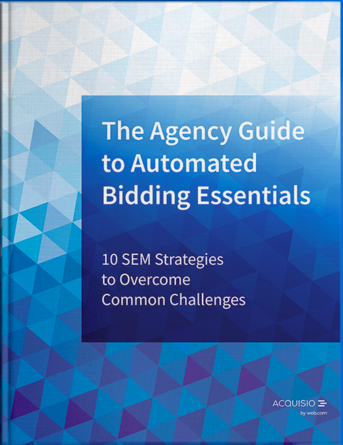