It was a hard-fought contest. We had entries from around the world from hopefuls who believed that they had what it took to create the next great Acquisio t-shirt 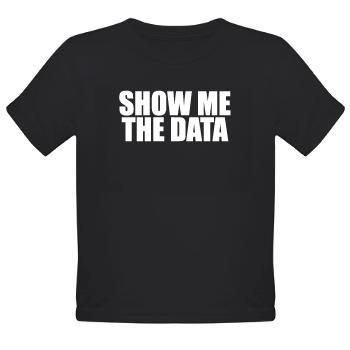 slogan. And in the end, five were selected and were brought to you, the people who would one day proudly wear one of these world-famous t-shirts, and you were tasked with selecting a winner.

Well, you, the people, have spoken, and you have spoken loud and clear!

By an overwhelming majority, we’re proud to announce that the very clear winner of our contest is “Show Me the Data!”

The very clever slogan, which is an obvious homage to a young Cuba Gooding Jr. in the movie Jerry Maguire, won by a very large margin, and we’re pleased to announce that Mey Marani of Reprise Media is our winner!

As a result of this win, Mey has earned a plane ticket to Montreal, two nights in a swanky room at the Hyatt Montreal, and a free ticket for the Acquisio User Summit coming up on June 28!

So, hearty congratulations to Jeri, as well as to our other runners-up. You never know, you may see one of these other slogans pop up on a t-shirt one day. Here’s how you voted on the contest:

3rd place: What is thy bidding? Acquisio does my bidding – 22 likes

Make sure that you stop by and see us at the next conference to get your t-shirt. We’ll have loads of them at the Acquisio User Summit, so those of you who are already registered are guaranteed one of these great shirts!