Google announced that as of October 4th, 2017 advertisers can spend twice their daily budget in AdWords, whether they want to or not. These changes to daily spend configuration has the entire advertiser community all like:

To give you a taste of how advertisers are reacting to the news, here are just a few of the reponses: 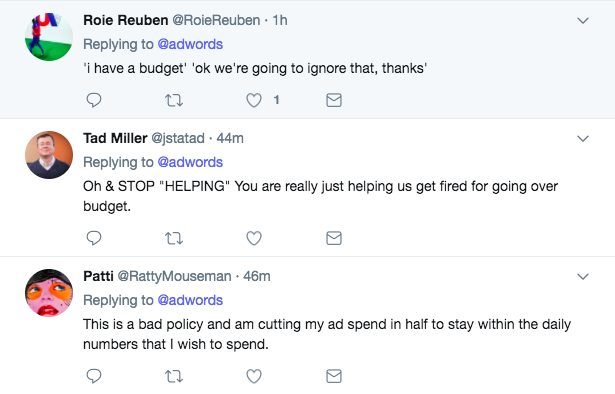 Advertisers are upset because they don’t want to lose control of their daily budget spend, go over budget, have to spend more or run out of money earlier in the month than they intended. Google’s post about the announcement explains that while they may spend up to twice your daily budget on high traffic days, that they will never exceed your monthly budget. They also explain that this move is to help advertisers reach their advertising goals, be it clicks or conversions.

What is unclear is how advertisers should be reacting to the news.

As we saw above on Twitter, some are up in arms about it. While Google provides examples and context in their announcement to not alarm advertisers, it seems panic has already set in. Despite reassurance from Google, people are worried because it’s currently unclear how this update will affect their campaigns. With the implementation taking place on the same day it was announced, advertisers feel like setting their daily budget means nothing now and don’t know what the outcome will be.

To give some context, if your daily budget is $5, Google won’t spend more than what that daily budget would have worked out to at the end of the month. However they can now double your daily budget, spending up to $10 in one day, if they determine that one day was more profitable for your campaign. To not overspend, they will now compensate with lower spending days of say $2, again to not overspend the total monthly budget the advertiser intended.

But what if Google determines that for this same budget, the first 15 days of the month are the most profitable? Under the new daily spend changes, this would max out their $5 per day budget only half way through the month. As seasoned PPC marketers know, clicks always cost less at the end of the month, so in the example above, if it played out that way, it wouldn’t necessarily be favourable. However the point is that we don’t know exactly how this update will affect individual accounts.

Anyone worried about how their daily budget spend will unfold given the recent AdWords update needs to try Acquisio Turing, our machine learning suite of algorithms, originally designed to deal with budgets better than anyone. Acquisio Turing wears many hats, but one of the things it’s best at is getting advertisers the most value for the daily budget they set and delivering perfect budget attainment every single time – that goes for any size budget. That means advertisers will never over or underspend their budget and it will be perfectly paced and spread throughout the month.

In our recent post, Why Budget Attainment Should Be a KPI, we explained the concept of budget attainment in the context of using machine learning:

“Budget attainment needs to be on the PPC marketer’s radar as an important KPI of how their campaigns are progressing. Pacing a budget carefully over time encourages consistent growth over the month and accurate results on performance. Pairing this KPI with machine learning is a winning combo.”

Despite Google’s positioning of the update to help PPC marketers better achieve their goals, the community is just not taking it that way. In the coming weeks we suspect that more information from Google will help to clarify how the update will impact individual accounts for many different potentially scary scenarios. At the end of the day, advertisers may like the results of the new update, but there is also a good chance they’ll continue to ask for control of their daily budget back.