The Science Behind Bid and Budget Management

Search Engine Marketing events are perfect opportunities for marketing professionals to share knowledge and learn from one another. The Acquisio team frequents some of the top industry events across the globe and one of the favorites is SMX Advanced, Seattle.

This year, Chief Scientist, Bryan Minor, Ph.D., shared some of the science secrets behind Acquisio’s automated Bid & Budget Management solution (BBM) and the response was overwhelming. Industry experts were lining up to hear more.

To satisfy demand, it’s time these insights were shared with the public.

The problem most businesses want to solve is how to optimize SEM efforts. More specifically, companies want the lowest cost per click with the highest generation of clicks or conversions. Finding that balance, while effectively spending the budget, is what Acquisio’s automated Bid & Budget Management system (BBM) does. Here’s how.

How does BBM work?

Once a day adjustments are like shooting a cannon ball – shoot, see where it lands and adjust the cannon. Constant bid adjustments are more like a cruise missile – so accurate they can go through a window of a building 2000 miles away. That’s because cruise missiles steer onto their target the whole time by making small adjustments every short period of time.

No, Acquisio doesn’t use cruise missile algorithms (although the brain behind the bid and budget management solution did work on space and rocket technology from a theoretical standpoint). The algorithms simply take the data provided and make the best decision scientifically possible.

The idea is not to steer all the way to the solution, but to steer towards it, adjusting to changes as they come. The algorithms are able to deal with changes in:

This proves to be a more accurate way of getting the most clicks and conversions for the lowest CPC.

With BBM, the daily budget is guaranteed to last all day, running out just before midnight. For example, if it is Black Friday and businesses are paying out the ear for clicks, the BBM system automatically lowers the bid. When other brands have exhausted spend by noon, BBM optimized campaigns last the whole day and pay far less per CPC, especially those at the end of the day, resulting in far more clicks for the same daily budget (resulting in significant saving).

Also, budget precision is plus or minus 2 percent meaning spend is, on average, 98 percent of the budget for every campaign, even ones with small budgets. And when working with groups of campaigns that share a monthly budget, the automated bid and budget management solution fairly competes the campaigns, so each one gets a chance to spend the daily budget without the use of hard allocations.

This isn’t a sales pitch, it’s a science talk. So here’s the work Bryan Minor did to get BBM to where it is now. 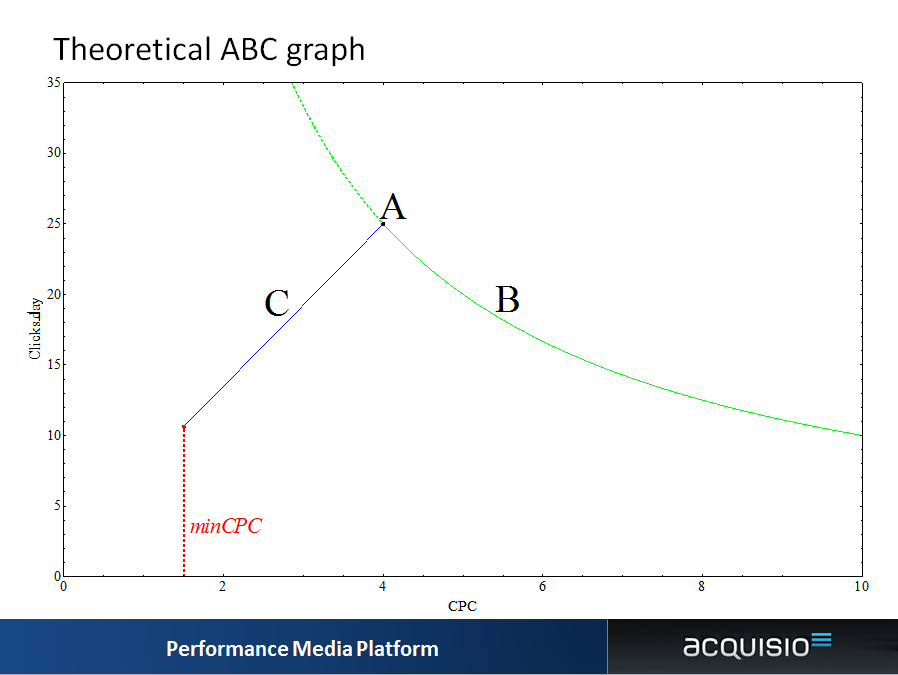 Dr. Minor wanted to find a way to always know the lowest CPC for the highest return on clicks and conversions, that way determining what to spend and bid would be much clearer. His algorithmic quest to discover the sweet spot of SEM resulted in this ABC graph:

A is the point the BBM “cruise missile” steers towards. It offers the maximum number of clicks for a fixed daily budget obeying all constraints.

This graph is meaningful because it explains how the algorithms approximate where A is as a function of CPC. For example, this graph helps determine how the maximum number of clicks per day varies with daily budget, and what is the associated CPC. The process of continuously steering to A not only provides validation of the methodology used but over time reveals a deep understanding of the true advertising opportunity.

Not just a theory

Here is real data from a client over the span of a few months with BBM.  The B data is represented by the oval points fitted around the curved line. The C data is represented by the hexagon points fitted around the straight green line. The intersection of these two lines is the  first estimate of A. This real life example clearly validates the ABC theory. 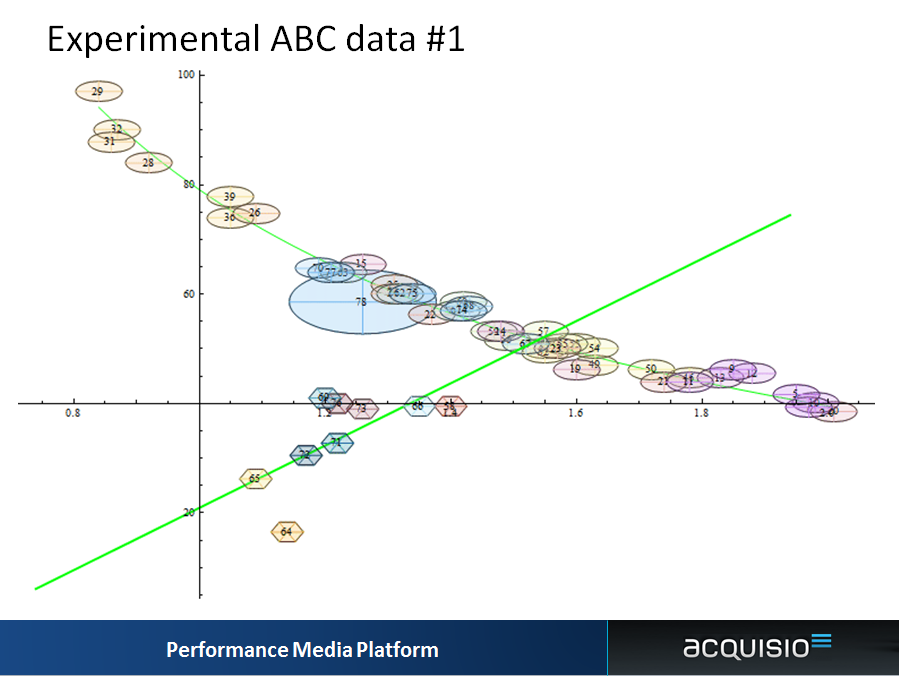 These graphs may seem complicated at first glance, but the key point is that the data matches the ABC theory, and this validates the use of this information as the basis for BBM. The system can confidently decide what to pay for CPC in order to achieve the most clicks, so campaign managers don’t have to. 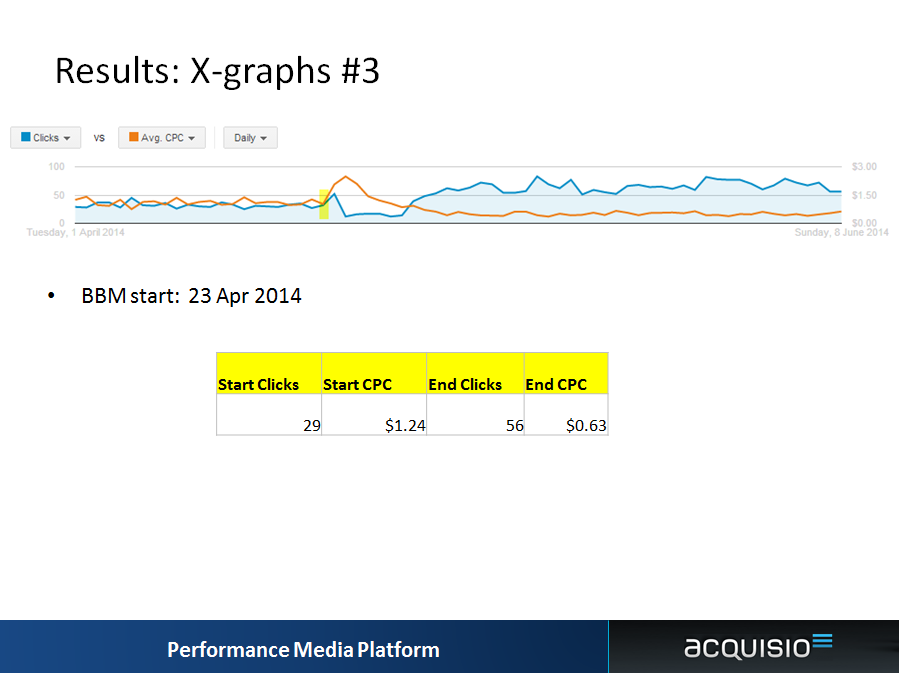 After a two day period of initial learning, the client quickly started to see more clicks for the same amount of money, resulting in a much lower CPC. With just 29 clicks per day as a starting point, BBM doubled the clicks to 56 and cut the CPC in half for the same Daily Budget.

What’s interesting about this example is that the client isn’t asking for hundreds or thousands of clicks but tens, and the system still works – it works for any sized business. Plus, the volatility diminished after optimization, showing that making many smaller and more frequent adjustments to CPC targeting results in more precise control of campaign performance.

Google settings and algorithm changes cannot be controlled, and new constraints cannot always be predicted, but just as the cruise missile doesn’t know why the tank driver turned left, it doesn’t matter. The missile turns left without knowing the reason, and the BBM system adapts to changes without any justification or explanation as well.

The algorithms simply use the data to make the best decision possible, and that’s quite literally the best available solution for SEM optimization thus far.

“A talk can always be judged by the questions,” explained Bryan Minor.  After he presented this information at SMX Advanced, Minor had a lineup of intrigued SEM experts waiting to ask him more about BBM. It’s only natural to have a question after this presentation.

Leave a comment and get an answer. It’s that simple. Bryan Minor has many more scientific secrets to share.

Manual Vs. Automated Bidding Quiz: What’s the Best Strategy for You?

How do you know if it’s time to start testing and experimenting with automated bidding? Some people actually don’t have accounts that are the best fit for automated bidding, while others could be doing worlds better than they are with the flick of a...