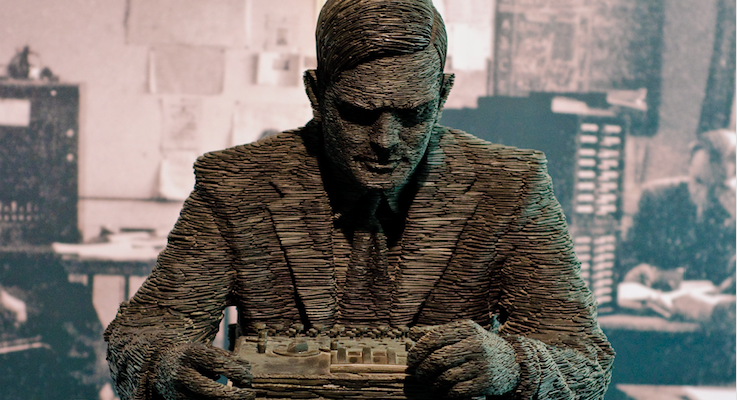 The following post is an excerpt from our upcoming eBook that will be released later this month – stay tuned!

Companies like Microsoft, Salesforce, Hubspot, Equals 3 and more are pivoting to focus on their AI products. Part of the pivot is branding the AI and machine learning algorithms and technology. Acquisio’s paid media platform is the first application of advanced machine learning technology to optimize and scale local marketing – so we understand the need to give these algorithms a name. AdWeek recently wrote about the phenomenon of large tech companies humanizing their platforms by identifying them with human names. IBM said their decision to name their platform Watson was in part to make their machine feel more human, approachable and warm. In Acquisio’s case, the decision to name our machine learning technology after Alan Turing was one driven by awe and inspiration, making every algorithm we create pass the Turing Test.

Who Was Alan Turing?

Alan Turing was a mathematician, a logician, a cryptanalyst and an early computer scientist who became a war hero. In 1950, Alan Turing proposed the Turing test as a measure of machine intelligence four years before he died. The test consists of a human observer communicating with another human and a machine, and is tasked with telling them apart. If the machine can “trick” the observer into thinking it is a human in this natural language conversation, it passes the Turing test. Since its introduction the test has been the subject of extensive debate about its applicability in defining Artificial Intelligence.

“A computer would deserve to be called intelligent if it could deceive a human into believing that it was human.”  – Alan Turing

A Long History of Bid and Budget Management

Acquisio has coded predictive algorithms that learn how to optimize marketing results across channels and ad platforms. The machine is constantly making high-frequency optimized bids and adjustments within budget, which is why it became known as BBM – bid and budget management. BBM earned a name for itself as the fastest performing SEM optimization technology on the market. Today BBM is an example of algorithms not being explicitly programmed, but having the ability to quickly learn and adjust to a new situation.

Machines are getting unprecedented results for our clients and PPC managers have made a lot of money by plugging BBM into their search campaigns using the Acquisio Platform.

Over the last few years these algorithms evolved past search engine optimization. Today our world-class Machine Learning layer powers every Acquisio product including Dynamic Campaigns and our platform for local businesses called Promote. The machine learning algorithms are no longer just about bid and budgets, rather they form a new foundation for innovation within marketing tech that our team is harvesting. As the personality of our algorithms evolves so came the need for a new name. Today Acquisio’s machine learning layer is appropriately and fondly called Acquisio TuringTM.

Acquisio Turing was built in Montreal amongst a globally-recognized hub for artificial intelligence research, innovation and development. The layer self-improves by analyzing enormous sets of live campaign data, surpassing its own level of intelligence daily. We’re learning new things everyday that we didn’t even know existed, and new relationships are being discovered in the data constantly. Acquisio Turing joins the self-improving cluster of machine-intelligence applied to marketing, aiming to deliver significantly better results than even the smartest humans.

The outcomes of our machine learning technology in the marketplace have been significant. Campaign managers see better campaign performance, even for low budget or volume spends. Our technology also automates workflows, offering dramatic improvements to operational efficiency. We’ve also proven that it can decrease OPEX, increase LTV, lower customer churn rates and improve customer satisfaction. Most importantly our machine learning technology gets our customer’s accounts more clicks and conversions for less money.

In June, our team went out to Seattle for SMX Advanced 2018. While we were there we heard experts talking about how Google’s machine learning isn’t truly a hands-free solution and that campaign managers have to adjust and update CPA and ROAS targets...

As it seems the whole world is scrambling to become GDPR friendly before May 25, 2018, some marketers are making the most of compliance. As we stated in our controversial post about why marketers should celebrate the GDPR “The new regulations...