2014 is wrapping up and it’s time to take a look at last year’s predictions ebook and see which of the predictions came true and which ones fell flat. With digital marketing trends changing faster than agencies can keep up with, there is a lot to learn from the past year, especially when planning for the year to come. Let’s take a look back and see where the experts thought we would be today.

Looking at the 2014 predictions, we can see that many of the industry thought leaders were correct in their forecasts for the future of SEM.

The growth of mobile and the importance of cross device experience were among the biggest themes for the 2014 predictions. Mobile as we know it is on the rise and is here to stay, with 35% of aggregated web traffic in the U.S. comes from mobile phones and tablets. While it’s been a running gag that the year of mobile never ends, optimizing for mobile was the big buzz in 2014, as predicted. We can expect to see more optimization in 2015, and several digital marketers experts predicted, yet again, that mobile compatibility and optimization would be paramount in 2015.  It’s clear that neglecting mobile, or simply squishing desktop content onto a smaller screen, could result in sacrificing a huge share of the target audience and it’s taken years to really get proactive with these cross device updates.

Many industry professionals also thought Yahoo and Bing would gain larger chunks of the search share pie. This is exactly what happened. Following the default search engine deal with Firefox for Yahoo, results show a boost from 9.6 percent of search share to 29.4 percent in just two short weeks after the deal. As for Bing, Microsoft announced it will give away its OS for free on small devices, and Bing will be the default search engine, which Marc predicted will help Bing eat into some of Google’s search share once these device begin circulating. Yet again, experts are predicting growth from Yahoo and Bing in 2015, so we can expect to see big thing as Yahoo and Bing continue to be a significant threat to the all powerful Google.

What Predictions Didn’t Quite Workout

Some of the thought leaders suggested that budgets will shift away from social towards more search and retargeting networks. On one hand, social seems stronger than ever, with Facebook influencing 30% of American women when deciding what to buy and Pinterest influencing 22%. And social ad spend continues to grow, with emarketer estimating social network ad spending, worldwide, to have increased 50.5% in 2014. That growth is expected to taper off, estimated at 30.1% growth for 2015, but despite the start of a plateau on social ad spend, this only marks the stage of maturity for social spending, rather than an abandonment of the platforms. In terms of retargeting, real time bidding (RTB) and programmatic bidding have been huge buzzwords in 2014, and it seems that part of this prediction was true after all.

Another round of predictions that were half true involved native advertising. Most of the experts felt native advertising would flourish in 2014, which it has.  Studies show that consumers look at native ads 52% more frequently than banner ads and native ads are generally more effective for branding and influencing buying decisions since the consumer’s eye is not yet trained to ignore native ads as they are designed to flow with the natural form and function in which the ad was placed. As a result, click through rates have been significantly higher for native ads. However Acquisio’s very own Marc Poirier felt native ads would hit a wall sometime in 2014, which (luckily for marketers) didn’t happen. Marc felt that when consumers start to recognize these ads more easily as they bombard their daily virtual routines, click through rates would tank, and while this may happen in the future, as one expert predicted in our 2015 predictions ebook, it wasn’t so true for 2014.

For those who missed it, here’s the full 2014 predictions ebook.

Don’t forget to check out predictions for 2015 and place your bets on who will be right or wrong next year. 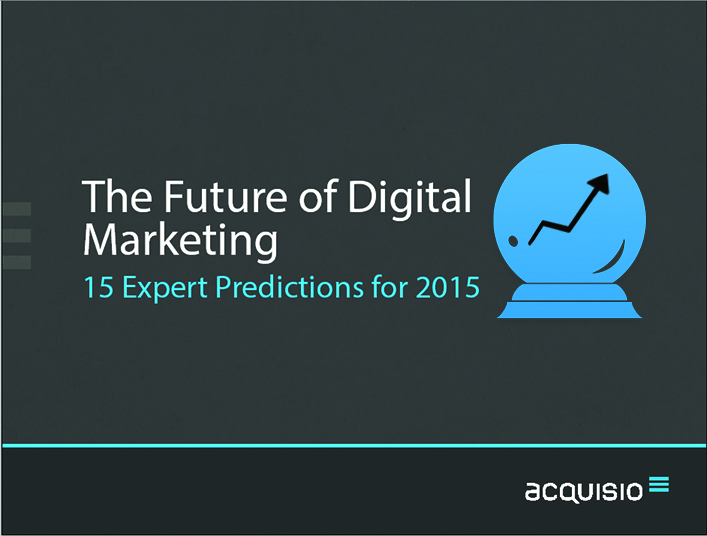 Madison is a highly creative individual with a strong sense of how to leverage marketing to drive results and business. She has helped companies gain a stronger online presence to maintain top-of-mind positioning. She is currently the marketing coordinator at Acquisio and can be found doing graphic design and portrait art in her spare time.