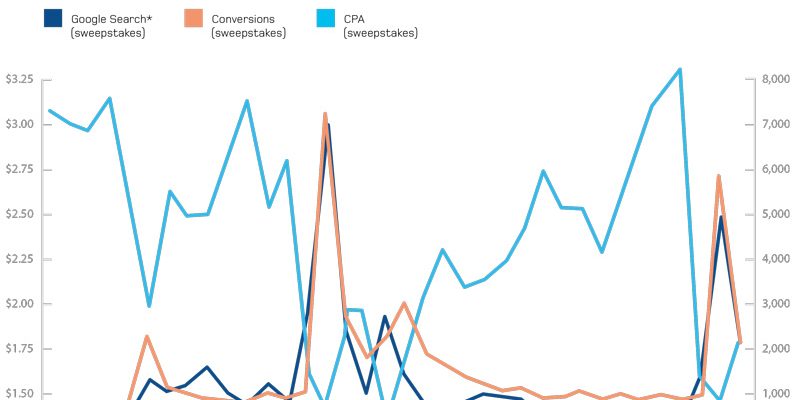 Why is Speed So Important for Bid Optimization?

Acquisio prides itself on being one of the fastest bid and budget optimization solutions on the market, but what does speed really have to do with getting more clicks or conversions and paying less?

You need to be quick in the auction. The first thing that comes to mind is the fast-talking auctioneer, and while PPC auctions don’t quite work that way, the idea is somewhat similar.

In the PPC auction, you don’t know what others are bidding, but you can be sure that the environment changes constantly throughout the day.

If you set a bid, that you think is reasonable, and then leave it all day, you’ll likely come back to your account the next day and be disappointed with the results.

Many “predictive” algorithms adjust bids as infrequently as daily or even weekly. By predicting and adjusting bids every 30 minutes, Acquisio participates in the auction more often than any other optimization solution, with the goal of driving CPC/CPA down and clicks/conversions up.

In essence, the faster you are to respond to changes in the auction, the more accurately you can set your bids, and the more bid changes you make throughout the day, the more clicks and leads you’ll get for your budget.

There are too many distractions and tasks to manage throughout the day, so staying active and alert in the auction is a job best left to the machines.

Acquisio’s bid optimization algorithms update 48 times a day, to make sure that what you bid is the best possible action you can make in the auction at that time.

Using advanced machine learning to make constant changes across campaigns, Acquisio can drive maximum results without requiring a human to be constantly adjusting bids and making decisions manually. We can also deliver those results consistently, which is very difficult to do with teams of campaign managers, all of whom may have a different level of performance themselves.

To understand how speed can impact your campaigns, here is a great example:

A popular parenting magazine was bidding for the word “sweepstakes.” Typically the brand would get close to 1000 conversions a day through search traffic.

On August 15th, however, there was an ad on television which prompted an increase in the number of people searching for “sweepstakes”. Search queries went up by a factor of 7 as evidenced by the normalized Google Trends line (in the graph below), and conversions surged along with the searchers.

Great news! But if the bid had remained the same in this unexpected situations, the company would have spent their full budget before days end, and lost out on thousands of potential conversions.

With Acquisio’s optimization, as soon as the spike started, the algorithms quickly adjusted to lower the bid. Lowering the bid meant the brand was able to convert more customers by stretching their budget throughout the full day and the brand was able to capitalize on the influx of new searchers, without paying an arm and a leg.

Luckily, with speed on their side, it was easy to set more accurate bids given the changes to the situation. See for yourself: 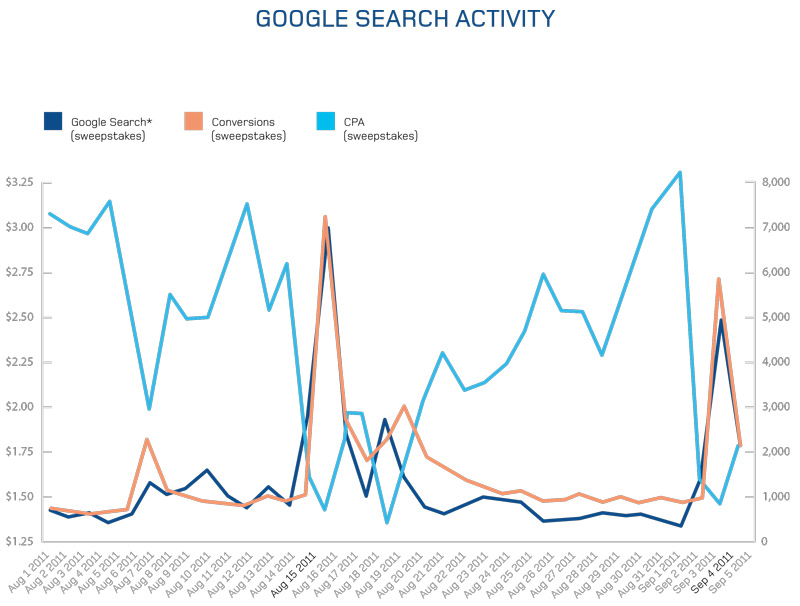 There are so many factors at play when it comes to PPC, and daily bid adjustments just don’t cut it anymore.

When we say our bid optimization is fast, we also mean that it is the most active, constantly analyzing, adapting, updating and predicting more accurately. We’ve found that the faster we take action, the better the results. 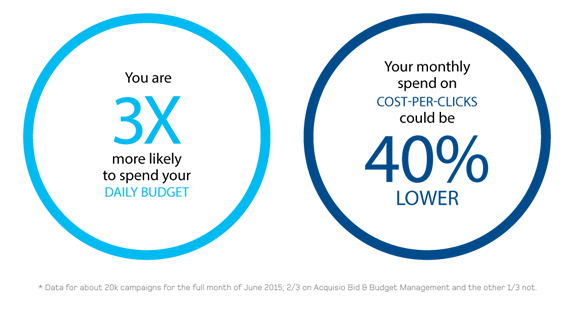 And that’s why speed matters.

So let me ask you, if you could replicate these results without adding any more work to your plate, would you? 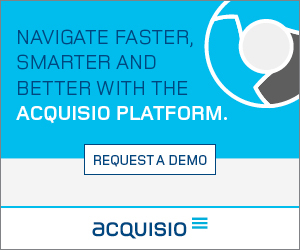