Over time, by watching the queries that each keyword attracts we can tune this system quite precisely, not only filtering unwanted queries with new negative keywords, but expanding our total volume through quality score and bidding improvements and tailoring the ROI of different query classes.

And promised to expand and elaborate. So here it is:

Tuning Options When you buy the same keyword at different match types, or different keywords and phrases at different match types in a coordinated effort to properly target and value queries, your initial settings will be less than perfect. You don’t know what queries you’ll see, the price you’ll pay for each, or how they’ll perform in terms of conversions. But you can monitor and measure each of these over time, and make adjustments to create a more effective trap. There are three controls you’ll primarily use to tune the trap:

I should have pointed out somewhere earlier, that by far the best way to configure the MTKT is to separately each keyword group with different Match Types into separate Ad-Groups. This makes reporting and measurement easier, and allows you to control negatives at the right level. As a naming convention , we end each Ad-Group name with a (E) if it holds Exact Match keyword, (P) if it holds Phrase Match keywords, and (B) for Broad Match. This makes is much easier when visually inspecting reports or making account changes. Measuring Progress Success with your MTKT is achieved when you’re attracting only desirable queries and have maximized ROI by setting bids according to conversion profitability. 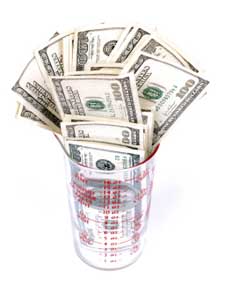 Reviewing the queries on an ad-group by ad-group basis is the cornerstone of the process.  The Exact Match keywords should be clear and profitable. The Phrase Matches should be on target or quickly either promoted to Exact or made into negatives. And the Broad Match should also winnow down in many cases (but not always) through promotion or negative creation. In some cases the Broad Match ad-groups are ultimately turned off, or left running with extra low bids just to capture any potentially new and interesting queries. Results are harder to summarize, although as pointed out in the previous post, what you normally shouldn’t see is great variation between the ROI (or ROAS if you must still use that horrid metric) for the different Match Type divided ad-groups. There are exceptions, but they should be positive ones where Exact Match, or more rarely Phrase Match groups are extremely profitable while others are just normally so. But very low or negative returns are a sign that either the queries being attracted just don’t have potential, or else something later in the chain is wrong – ad-text, landing page, offer, checkout process etc. Next Up In the next post, unless something else comes up we’ll finally cover that Rock Scissors Paper game I promised to disclose.