Now in its 16th year, the IAB / PwC Ad Spend study is an important marker of digital advertising activity both in the UK and throughout the world. But what does it show, and how can we use it to support our digital marketing efforts? Here we take a look at some of the key findings, compare them against the US market and draw some trends and ideas from the figures.

The first and probably most important fact in light of the economic climate is that despite the core commercial challenges we all face, digital ad budgets are still growing – in the UK, the spend went up 12.6% to £2.591 billion from H1 2011 to H1 2012 and is increasing across all core sectors of display, search, classifieds and ‘other’ such as lead generation and affiliate marketing. In the US, digital ad spend rose 14% from $14.9 to $17 billion, with similar growth across all core channels. Compared visually against the full spread of channels, the digital opportunity in the UK is clear, with a 30% share of an £8.7 billion market: 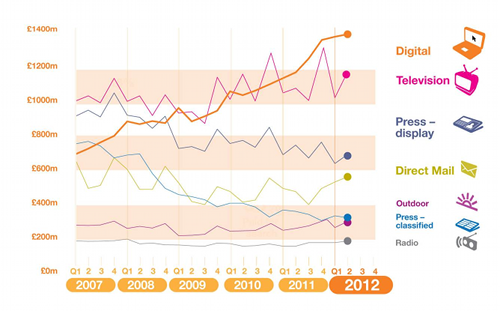 Breaking down ‘digital’ into its core components is where it gets interesting. Paid search is of course an area we are interested in tracking due to our heritage and so it is heartening to note that the channel continues to excite and provide great opportunity for those working within it. Comparing the UK figures to the IAB’s US report, search accounted for 58% of digital ad spend in the UK, versus 47% in the US, although the actual amounts of £1,527 million UK and $8.1 billion US show how the relative sizes of the geographical markets play out in actual spend. Apart from a slight drop in H1 2009, search has consistently grown every single period and is the largest single category for online ad spend in the UK. Paid search has proven itself to be both transparent and highly measurable, and is now supported by incredibly mature, sophisticated ad management tools that enable marketers to cut through the considerable technology clutter and put their money to work quickly and easily.

Display in the UK accounted for 23% of digital ad spend in H1 2012 (growing 10.6% year on year), and 33% (growing 4%) in the US. Nearly half the UK budget was spent on traditional banners, but social is quickly catching up now, with latest figures showing social media banners have a 22.7% share of the UK digital display market. Inventory is growing due to the increasing content and placements provided by companies such as Facebook with its incredible MAUs and Google’s mammoth Display Network, which in turn are more accessible through real time bidding exchanges. Larger, more creative formats are also encouraging key industry sectors deeper into display, such as consumer goods brands which have almost doubled their spend on display advertising in the last 3 years. Another major growth area in the display category is video. Spend on digital video display advertising increased 18% in the US in H1 2012, accounting for just over $1 billion for the very first time. In the UK, 11.8% of display spend was diverted to the channel, accounting for £69.8 million.

Mobile is an increasingly interesting area. With smartphone penetration in the UK now reaching 57.6% and the US just surpassing the 50% mark it’s clear that mobile advertising is a core focus moving forwards. The fact that the smartphone population now reaches 1 billion globally according to StrategyAnalytics, therefore equating to Facebook’s massive user numbers, should make those ‘only’ focusing on Facebook pause and reflect. If you are not deploying mobile marketing yet, this simple comparison should help you prove the business case for doing so. Looking at the ad spend figures once again, it’s clear that there is a similar trend happening in our major markets. In the US, mobile was the fastest growing channel, from $636 million to $1.2 billion (a 95% increase) while in the UK, mobile spend rose 132% from £77.9 to £181.5 million. Care should be taken before relying too heavily on the UK figures however as the number of companies reporting mobile spend also rose from 28 to 47 over the last year which will have skewed the figures to some degree. It is undoubtedly an area of rampant growth though, and one that an increasing number of agencies and marketers are focusing on. Breaking down the spend, search is the current headliner, accounting for 73% of H1 2012 mobile budget and growing 152% on the same period for last year. With its inherent purchase intent, coupled with a valuable location-based marker, mobile search is popular for a very good reason and a channel that traditional search marketing skills can easily be transferred across to. It’s not all about search, though. Mobile display nearly doubled in size, with banners and text links taking 23% of the pot, while video advertising and tenancy deals took 1% of spend each, with SMS and MMS equating to the final 2% allocated to the channel. Display budget is still neatly shared between in app and in browser placements, but browser inventory is starting to edge past application-based options, growing from 46% to 54% from H1 2011 to H1 2012 in the UK. As the industry continues to adopt and understand multi-channel digital, and consumers continue to adopt m-commerce, mobile browsing and more, the move away from the desktop will continue a-pace.

In the US, performance-based pricing is dominant, with 67% of advertising being based on this metric, compared to 31% for CPM and 2% for hybrids in H1 2012. In the UK, it’s a slightly more confusing space as we are still trying to delineate ‘performance marketing’ from affiliate activity, which is what most people are referring to when they talk of ‘performance’ over here. The shift is underway though, with companies such as Existem, organisers of the popular A4U Expo, publicly leading the charge towards a more evolved understanding of the discipline in the UK (helpfully outlined in an IAB blog post here. Looking at the IAB UK Ad Spend figures, following a slight reduction in 2010, CPM is, for now, gaining ground once more. The report estimates that 51% of revenue is generated in the cost per mille metric, while performance (such as CPA, CPC, CPL and CPE) generated 31% and fixed fees accounted for 18% of digital spend. Taking a closer look, though, the previous drop recorded in performance based advertising in 2011 has now levelled off and the metric is showing further growth again. I would be very surprised if the upwards trajectory does not continue. While the concept of viewable impressions and the rise of real-time bidding are shoring up CPM metrics for now, the undeniable truth that performance-based pricing allows for less risk and more bottom-line impact per penny spent will continue to convert any remaining non-believers.