Spotify is quickly becoming an advertising giant. The music streaming app now has over 100 million active users, according to the latest numbers. Half of those users are on Spotify for free, meaning they’re being advertised to while listening to music. And now that Spotify offers several different ways to advertise on the platform, marketers need to pay closer attention to the music-streaming giant.

Originally, Spotify launched its music playlist platform entirely for free. Then Spotify used audio and banner ads to prompt users to subscribe to the premium/paid version. Spotify is still doing this, but now those advertising slots are open to external advertisers. More recently, Spotify began selling ad space programatically, through a deal with The Trade Desk and other platforms.

Before we go further, it’s important to note the distinction between the Spotify-for-free and the premium subscription. Quite simply, the free version has ads and the premium doesn’t. Now, you may be wondering “why would I buy ad space on a platform that is pushing users to pay for its ad-free version?” Well, that’s not the full story.

Yes, Spotify does want users to pay for its premium service. But that doesn’t mean they’re writing off the free version. Spotify just acquired the video discovery startup MightyTV. The company hopes to use MightyTV to improve the user experience on its free and premium platforms. In a recent statement, Spotify’s VP of product Jason Richman stressed that the company views its free version as a standalone product, one that they need people to use. Without a heavy user base for its free streaming service, Spotify can’t sell ad space, so they’re definitely aware of its continued importance.

Anytime a user signs into Spotify, they’ll see a sponsored ad on their homepage banner. Again, this applies only to free users, something to keep in mind throughout the rest of this post. But homepage banner ads aren’t the only type of ad to be found on Spotify. Display marketers should expect to find both familiar and rather new ad formats available.

Like we already mentioned, display marketers now have access to Spotify ads through real-time bidding platforms like The Trade Desk. What makes Spotify a bit unique is the level of information provided. Using data provided by Spotify and first-party information, marketers can inform their buying decisions based on user-listening-habits.

Certain Spotify ad formats are also more resistant to ad-blockers, said Spotify this past summer. Audio ad formats are particularly more effective against ad-blocking software. But it’s not as if Spotify users are entirely against ads while enjoying music. According to numbers from Spotify, 75% of digital audio listeners think commercials are totally fine on a free streaming service. 47% also said that ads are even less intrusive on a service like Spotify, rather than traditional radio.

Several different ad formats are available to advertisers on Spotify, from sponsored playlists to video takeovers. For display marketers, though, two Spotify ad formats will useful: audio and banner ads.

All audio ads on Spotify are played during commercial ads breaks, in-between songs. When the soundbite is playing, an ad image in Spotify’s Cover Art section is presented along with a Campaign Name that users can click on. Audio ads are applicable across devices, too, so they can be heard on desktop, mobile and consoles.

To get a sense of how the platform works, check out the audio ad example for Clipper tea below.

So, as you can see, there are two elements to a Spotify audio ad. There’s the audio ad, which Spotify limits to being 15 to 30 seconds in length, and there’s the clickable campaign image. The interplay between the two is what makes a Spotify audio ad a bit different from your typical programmatic display ad.

But what truly makes audio ads on Spotify so exciting, though, is the ability to target specific audiences. Using Spotify’s user-data, you can specify a target audience based on age, gender, musical genre, or a specific playlist. Combining this info with The Trade Desk’s audience targeting tools, you can ensure that your audio ads are being seen and heard on playlists that your target demographic is actually listening to.

Display marketers will be far more familiar with this Spotify ad format. Banner ads on Spotify are pretty much the same as anywhere else. The only key difference is that these banner ads live exclusively on the Spotify platform. According to Spotify’s specs, display ads are showcased to users for 30 seconds, being visible the whole time (unless Spotify is minimized) and won’t be shown at the same time as another ad.

Banner ads are generally shown at the top of the Spotify browser when a user signs in. Then, when they’re already listening to a playlist or selection of songs, the display ad moves to the bottom of the page. We’ve got a few examples to show you how a banner ad on Spotify will look, like this one from Air Transat. 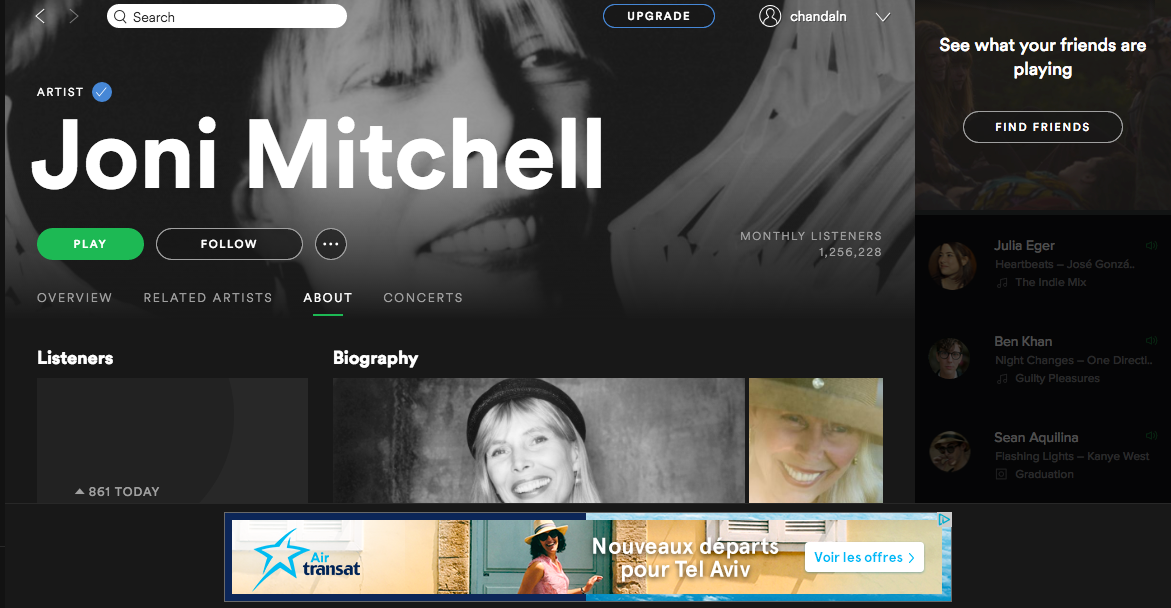 Here’s another from Sonnet Insurance.

And here’s one from Subway that gives you a sense of what banner ads look like on the Spotify home page. 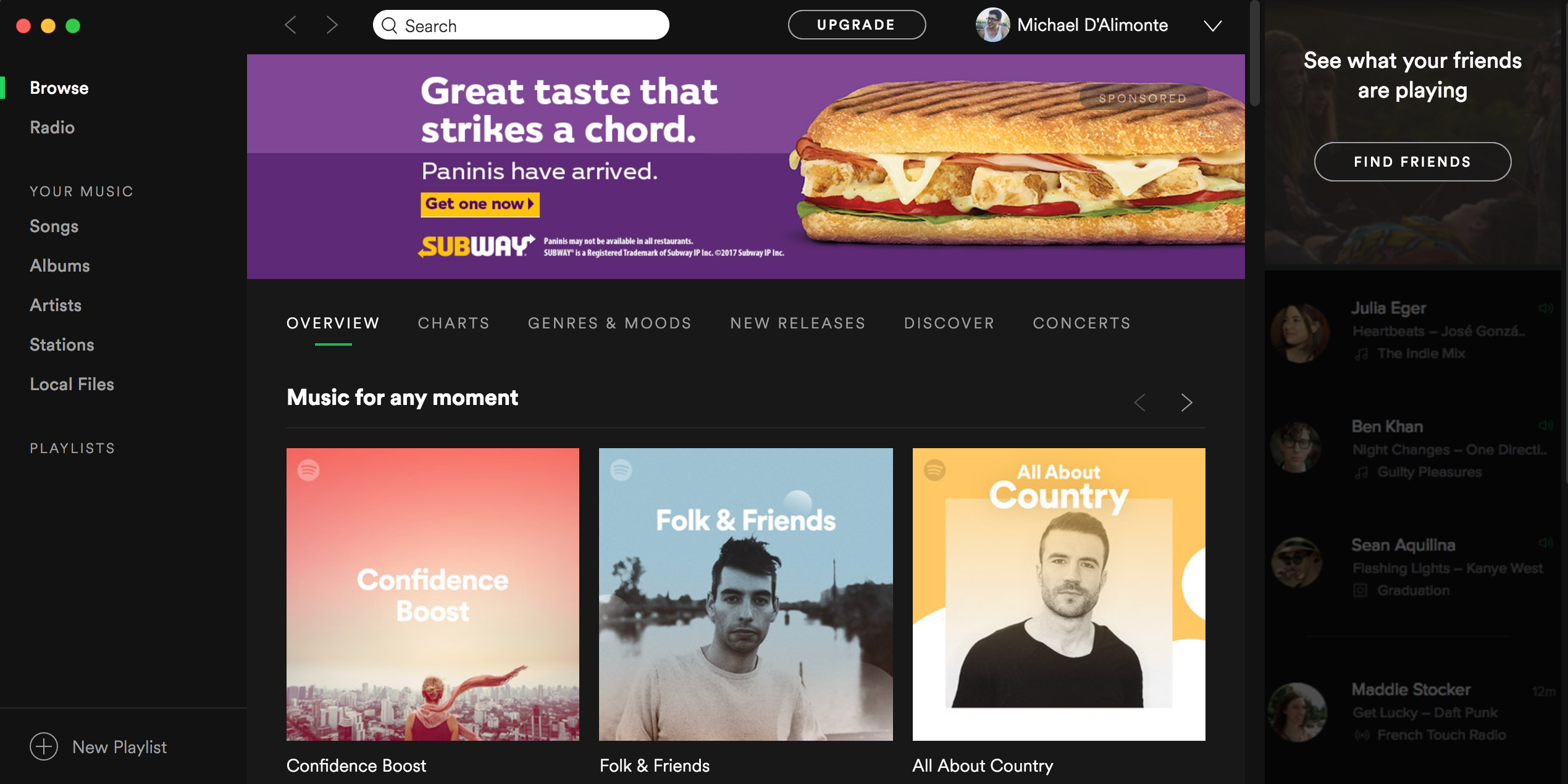 Spotify also uses banner ads to promote itself on the platform. If anyone knows that display ads on Spotify work, it’s the Spotify team themselves. So seeing Spotify banner ads on Spotify makes us a bit more confident in the platform and ad format. Check out how Spotify advertises its sponsored playlists and premium service below.

A large user base, audience targeting, and multiple ad formats makes Spotify a useful marketing channel for display advertisers. Hopefully by now you’ve got a good sense of how Spotify display ads work, and the benefits they bring to marketers. Remember, more channels are always better, especially when you have the right display ad management tools!