The Revolution Will Not Be Optimized 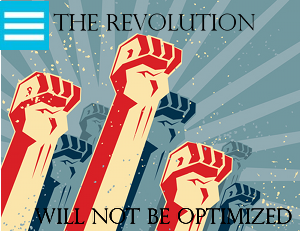 Twelve years ago I learned the two best SEO lessons I will ever learn, and I learned them without even knowing it. I’d jumped on the (very small) blog bandwagon and started publishing content. It was the easiest way to have a presence on what was still a very new World Wide Web. All I had to do was share my thoughts in a primitive CMS, click “Publish,” and suddenly my words were accessible to, potentially, any of the approximately 360 million Internet subscribers at the time.

You May Ask Yourself, How Did I Get Here?

I used an early analytics service called StatCounter that told me how people came to my site, and, in some cases, what things they typed into a search engine to arrive there. I did not yet know that those were called keywords. In fact, very few people did; search engines were still trying to decide how to best get people the content they desired (they still are). But what I noticed most was that when I wrote something good, something useful, something entertaining –something valuable — that my friends would share it with their friends, who shared it with their friends, and so on, and so on, to quote what is arguably the greatest Faberge Organics commercial to date. And I started visiting the sites of those people who were linking to me, and I began linking to them. It was an amazing community: a community of individuals who, I do not 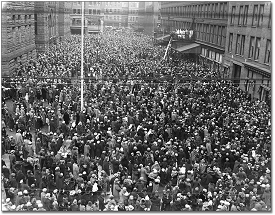 believe, knew the kind of revolution they were starting. I learned that to get people to my site I had to:

In my first several years as a Web copywriter, I wrote for content farms. By then, the Web had devolved into a swirling morass of putrid content farms that produced content in the same way that farmers grow corn: with vast amounts of shit, and steaming piles of rotting compost distracting visitors from seeing the inherent beauty of a place where things grow. The point was to have the most pages and, therefore, the most revenue opportunities via a display advertising scheme that was quickly becoming less and less effective, and, in turn, less and less popular. It was not uncommon to search for a topic, click on a result, and find an article with a specific keyword awkwardly plugged in every 60 words or so. As awkward as these were to write for those of us producing the content, it was doubly hard to read.

Google Brings in the Crops 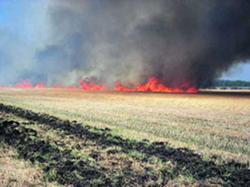 Google’s Panda update in early 2011 was intended to address the issue of “low-quality content,” and has done a fantastic job of ridding our results of the constant bombardment of “How To” articles that were so prevalent for so long (how many articles about ‘how to wear a sweater vest’ does the world really need?). Next came the Google Penguin update that went after black-hat SEO practitioners: the keyword stuffers, cloakers, link schemers, and content scrapers. And the last major update to Google’s algorithm has been to address the issue of site usability.

Idle Words are The Devil’s Playground

Matt Cutts, the man who is, for all intents and purposes, the public face of Google for SEO practitioners, has been quoted recently as saying, “Make a compelling site. Make a site that’s useful. Make a site that’s interesting. Make a site that’s relevant to people’s interests.” FI-NA-LLY! The best way to create a website now is not to try to game the system, but to create a website as though there were no search engines, to create a site that speaks directly to the people that you want to reach using the words that are most likely to reach those individuals. The best way to do SEO now is to not do SEO. The best way is to produce high-quality, relevant content, and to make it so compelling, so interesting, so engaging that people will have no choice but to share it. And the more they share it, the more interested search engines will become.

For writers all across the Web, these updates were the best thing that ever happened. We are finally able to write, edit, and curate content with no fear of not having the right keyword density. We are free to create content that speaks to people and give them a reason to read. But it’s only the beginning. Quality content is a revolution. It’s one that is starting slow, and one that, inevitably, will meet resistance. There is a long way to go towards educating Web professionals on the necessity of quality content; one can still see thousands of ads daily looking for $5 articles. But know this: If you continue to curate crap content for very little money, your pages will become as irrelevant to the Web as Internet Explorer 6.

The Revolution Will NOT Be Optimized