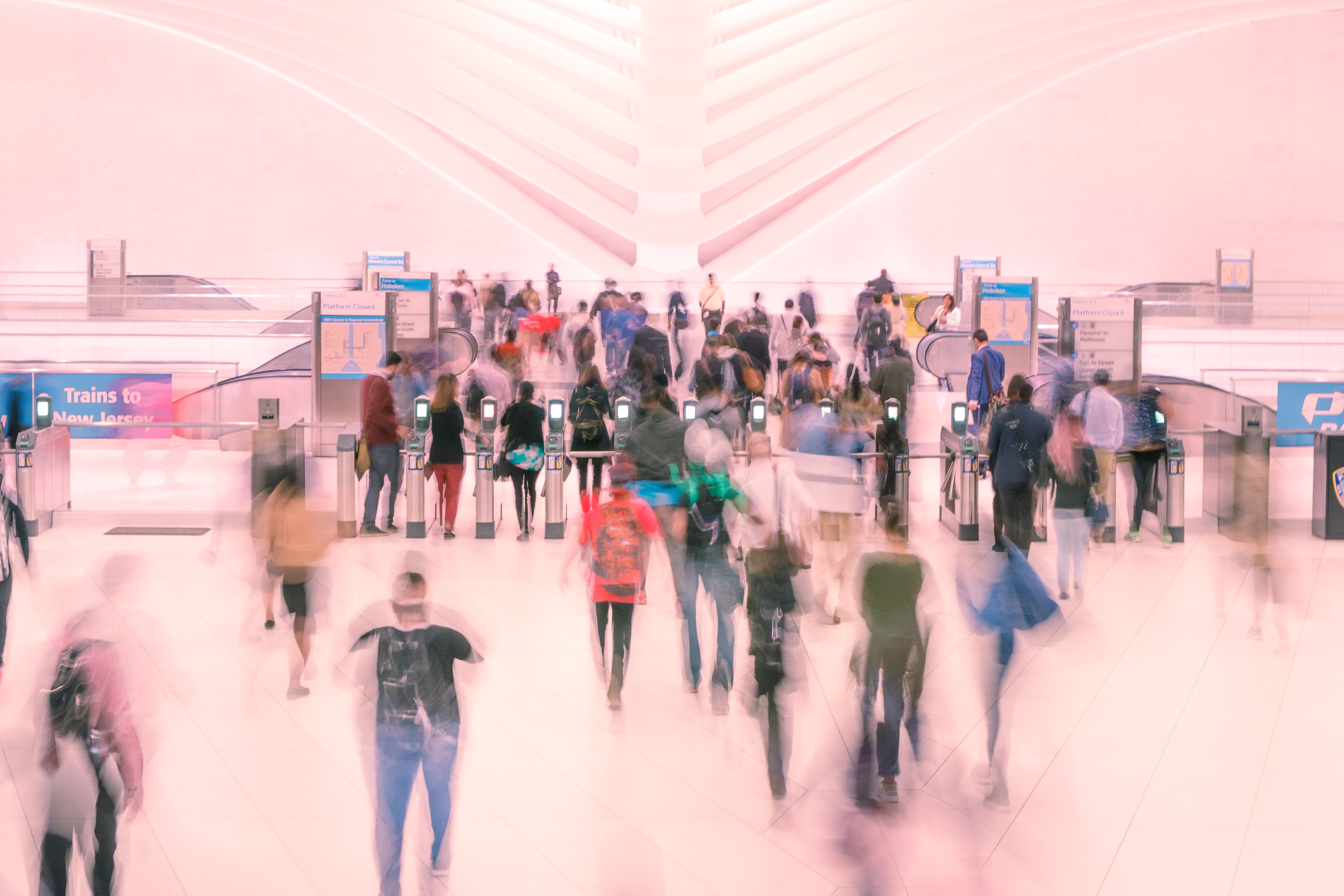 Facebook’s Campaign Budget Optimization Will Become Mandatory in September. Are You Ready?

Ready for a big change in September? We hope you are. Because on September 1st, Facebook will shift most of the campaigns on its advertising platform over to Campaign Budget Optimization.

This change is not coming to us without ample notice. Facebook announced its plan to make CBO mandatory back in September, and CBO has been available to advertisers since November 2017.

There’s only anecdotal evidence to answer those questions, but it is a bit disconcerting. Most Facebook advertisers have not tested CBO on any campaigns. And quite a few advertisers may be in for a surprise in September.

What is Campaign Budget Optimization?

Campaign Budget Optimization means your Facebook advertising budget will be set at the campaign level, rather than at the ad set level. Previously, advertisers allocated ad budget for each ad set. That’s over after September 1st, though there are a few ad management platforms that won’t have to use CBO until September 2020.

API-based tool users may eventually be required to use CBO at some point in 2020, but Facebook hasn’t announced a date for it yet. Please understand that this information may change, of course, if Facebook decides to change how it rolls out mandatory CBO.

Whenever CBO does go into effect for your campaigns, it will mean you have to assign a budget to an entire campaign, not individual ad sets. Then Facebook’s algorithm will go out and try to fulfill the campaign’s goal in the most efficient way, doling out budget to individual ad sets based on how well they achieve that goal.

If you do a lot of creative testing in Facebook, this may all sound familiar. The budget allocation will work much like how multiple pieces of ad creative within one ad set currently get more or less budget depending on how well the individual pieces of creative perform.

As you’ve probably guessed, Campaign Budget Optimization will cause some ad sets to get more budget than others. Maybe much more. But even with Campaign Budget Optimization on, “businesses can set bid caps and spend limits for each ad set” according to Facebook. So while we are losing a lot of control with this change, there will still be a way to force budget to any ad set.

The illustration below shows an example of how CBO will work. Note that on the left side of the diagram below, each ad set has a specified value for its budget. In the right side of the diagram, where CBO is turned on, the budget is defined at the campaign level. 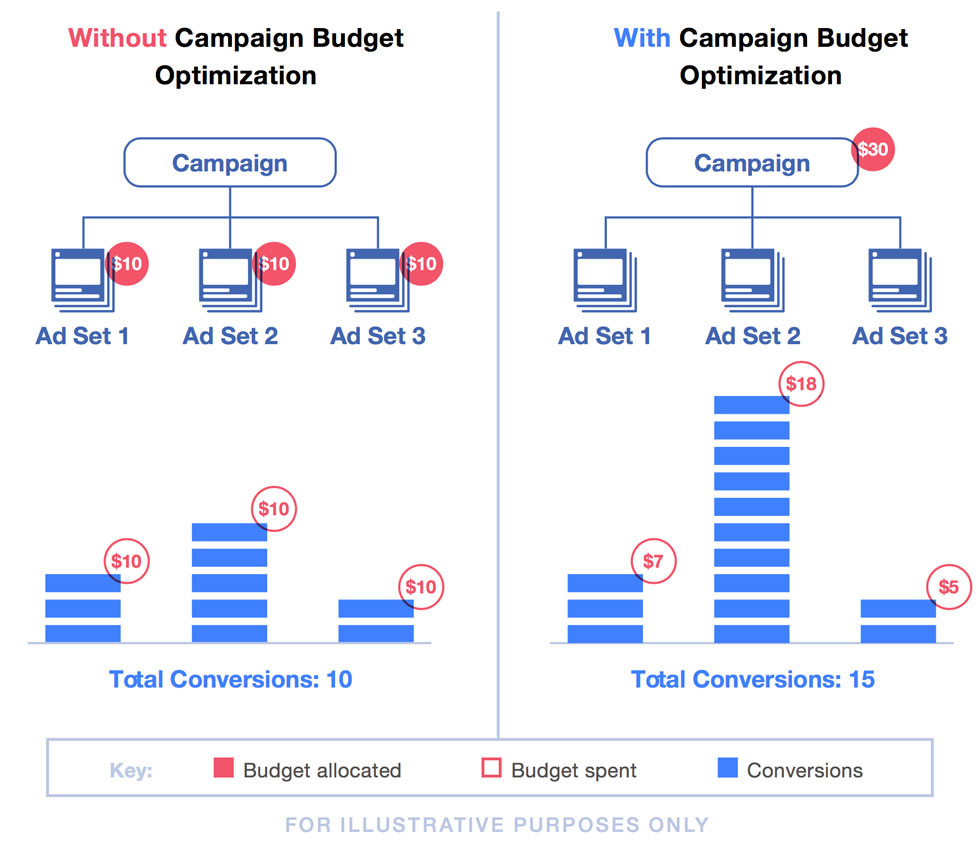 Also note that – at least in this example – the campaign using Campaign Budget Optimization generates more conversions for the same amount of budget. Quite a lot more conversions, too: 33% more.

This is the single best reason to not go into a panic about CBO or to try to circumvent it: Campaign Budget Optimization works. It’s likely to get you better results. So while we are giving up some control over our campaigns, September may actually end up being a very good month for your Facebook advertising (especially if you’ve done a few tests of CBO and structured your campaigns appropriately).

But the two other ad sets did get some budget. Even with CBO, you will still be able to set minimum ad spends for all the ad sets in each campaign, as mentioned above.

We recommend you use a light touch when setting minimum spends for ad sets. It might be possible to circumvent CBO somewhat if you just force minimum spends for all the ad sets in a campaign, but if you can step back a bit and let the algorithm do its job, you may get better results.

One of the ways Campaign Budget Optimization achieves better results is that it adjusts budgets in real-time.

So if the algorithm just happens to know it can get a few conversions for very little money between 8 am and 9:30 am for a particular ad placement, it will shift budget accordingly.

This is exactly the sort of super-fine tuning of budget management that humans just can’t realistically do. Previously, if we happened to know that a certain placement would perform well at a certain time, we could write a script to try to go after those unusually affordable conversions. But as soon as something changes, we’d lose that opportunity. And things are changing all the time. Constantly. Across hundreds of thousands of ad placements.

For a human to do what the Facebook algorithm can now do would require a level of data processing humans can’t achieve. We have to sleep. We can’t process 10,000 calculations in one second.

So while it may be uncomfortable to give up so much control with Campaign Budget Optimization (and all the other changes advertising automation brings), it’s best to step back and let the algorithm do its work.

Humans can still provide the big-picture goals, develop great creative, and study our audiences so we understand them better. But when it comes to second by second calculations for where to allocate budget most effectively, it’s time to let the machines take over.

You won’t have to worry about how much budget to allocate to each ad set. This will free up your time just a bit. We don’t think it will be hard for you to find other things to do.

This may help smaller advertisers and anyone who’s currently overwhelmed by Facebook’s advertising platform. It could also mean the day-to-day management of Facebook campaigns can be done by a less experienced (and less expensive) employee, agency, or freelancer.

CBO is an incremental step toward this, but it is one more step. And as automation continues, it’s possible Facebook’s advertising platform will become more accessible to people with less advertising skill. That could have significant effects. If 300,000 small businesses who can’t quite get Facebook ads to work profitably now are suddenly given a new, automated way to profitably run their ads, they’ll use the platform more. That could result in more competition, higher ad costs… or who knows what else. But making advertising more accessible to more people is clearly in Facebook’s best interest.

Facebook came out recently with a new “simplified campaign structure.” The illustrations below show their recommendations, and also illustrate how radical a change this may be for some advertisers. 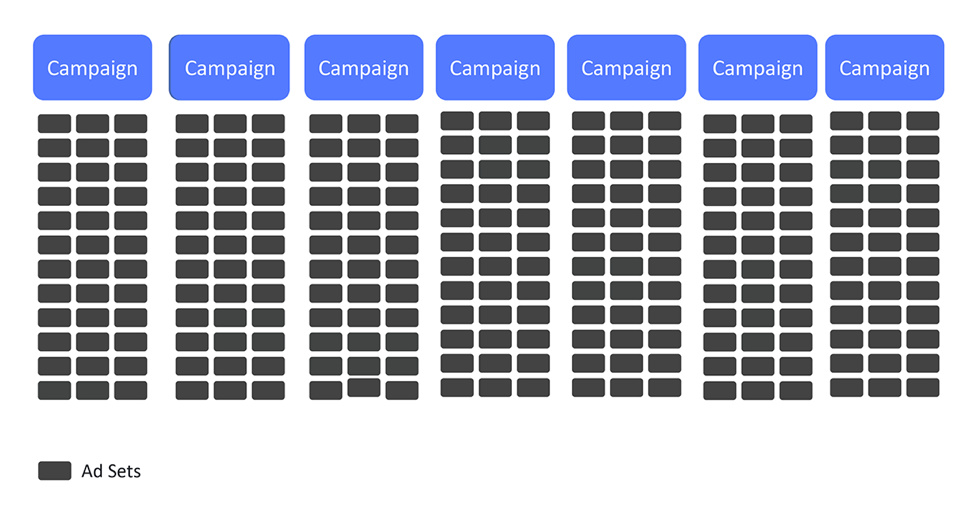 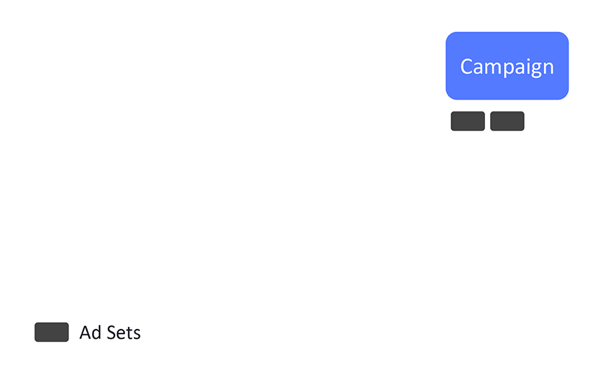 It’s possible that updating campaign structures may end up being the primary way Facebook advertising managers adapt to CBO. If your campaigns tend to have a lot of ad sets, think carefully about what may happen once all those ad set budgets get swept away, and Facebook’s algorithm starts deciding where to allocate budget.

Depending on your situation (and the ad sets within your campaigns), it may also make sense to create one or more new campaigns to use as containers for ad sets that might not perform well, or might perform very differently after CBO becomes mandatory.

But it is a pretty big step. Your campaigns will perform differently once the migration happens. So start testing Campaign Budget Optimization now.

As always, if you’re an Acquisio customer, we are standing by to help you with your campaigns. Because every company’s advertising is different, we’ve given you only high-level, general information on how CBO may affect your campaigns in this blog post. To get more personalized information, and to learn what you might want to test in the remaining weeks before your campaigns get switched over, contact your Acquisio representative today.