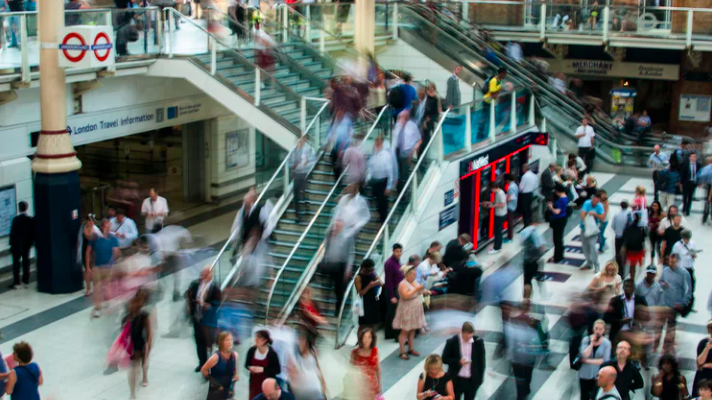 Ah, Black Friday. The most magical and most frightening time of the year for anyone involved in the retail industry. Black Friday is a little bit of everything: the marketers’ crunch time, the retailers’ main event, and a worldwide spectacle of epic proportions.

But no matter where you stand (or fall), there’s no denying it – Black Friday and the surrounding days have a huge impact on the retail industry and everyone associated with it: marketers, advertisers, even researchers. Every year marketers dig into the data to see what went right, what went wrong, and what we can do to make next year even more lucrative.

And on that note, with only days left before the busiest retail weekend of the year (gulp), let us present the top five data-backed Black Friday weekend predictions!

Prediction 1: More People Than Ever Before Will Make Purchases During Thanksgiving Weekend

Year after year (save for 2008), the fervor of the Thanksgiving weekend shop-a-thon has continued to intensify. According to the National Retail Federation (NRF), an estimated 164 million people (YoY increase of 6%) are intending to shop during the 2017 holiday weekend – and that’s just in the US. Of those that plan to get their shop on:

This is great news for marketers! The assumption that people are only considering shopping on the traditional shopping days of Black Friday and Cyber Monday is inaccurate – the whole holiday weekend is a massive ongoing opportunity to drive revenue growth. Don’t forget to keep up the momentum all the way through to 2018!

Last year, the NRF found 154.4 million people (YoY increase of 2%) had taken part in the shopping festivities during the Thanksgiving weekend.

In a survey of over 5000 US consumers, Deloitte’s 2017 Holiday Retail Survey predicts that 2017 online spending will overtake in-store spending for the first time. The same study pointed out that consumers expect to allocate the majority (51%) of their holiday budget online, reinforcing the anticipated shift to online-shopping-first consumer behavior.

Based on incredulous amounts of data via Adobe Analytics, online sales are expected to top $107.4 billion this season (YoY increase of 13.8%), with in-store sales lagging behind at only a 3.8% increase. Adobe suspects that Cyber Monday will take the prize for the largest online shopping day in history, generating $6.6 billion in sales (YoY increase of 16.5%).

With online/offline attribution becoming more and more accurate, this may be the dawn of a new era where the data will finally be able to tell the full story. For instance, are in-store holiday sales more affected by digital initiatives than we previously assumed? If that’s the case, this year’s purchase decisions may be more digitally driven than predicted. We’ll only know for sure after the dust settles on the 2017 data.

Adobe’s data found that $2.98 billion was spent online in 2015, beating the previous year’s record by over 12%. The upward trend continued, with $11 billion spent from Thanksgiving Day through Cyber Monday, marking a 15% increase from 2014.

The Deloitte study mentioned earlier suggested shoppers are planning to spend 51% of their budgets online this season. Of that number, 36% of the spend will take place on desktops/laptops, 10% on smartphones, and 5% on tablets.

While the majority of purchases will be finalized on a desktop, Adobe predicts that for the first time, mobile will make up a whopping 54% of holiday traffic, with desktop traffic coming in a close second at 46%.

The Deloitte study also implied the importance of smartphones as a vital part of the customer journey during the holidays, with 67% of shoppers using their phones to browse options, 65% to compare prices, and 63% to track orders. During a holiday where many are traveling, entertaining guests, and/or cooking up a storm in the kitchen, the accessibility of their smartphone means they won’t have to miss out on any deals.

Though not quite what it is today, mobile still accounted for 49% of retail traffic in 2015. Over $514 million in sales were attributed to mobile that year! Not bad for an up-and-comer.

Prediction 4: Paid Advertising Will Drive More Holiday Traffic than Ever Before

We recently discussed how Google’s continued investments in Google Shopping have increased Shopping’s popularity with marketers, and the lead up to the holidays is no exception. In Q3 of this year, PLA (Product Listing Ads) spend increased 37%, according to the Merkle Digital Marketing Report. As Andy Taylor explains in the SEL article:

With Google’s recent release of Showcase Shopping Ads out of beta testing and the steady rise of Local Inventory Ads for brick-and-mortar advertisers, it’s not out of the question that advertisers could once again see holiday sales from these ads grow even faster. – Andy Taylor, Merkle

And because even some Googler’s believe that paid search can be more relevant than organic results, paid advertising has an important role to play this holiday weekend when shoppers are working to beat the clock on limited time deals.

In 2016, $8.9 million was spent on Google desktop text ads (a hefty decrease from 2015) from Black Friday to Cyber Monday. However, PLA spend significantly increased to $9.6 million, as Google’s updates to Shopping really started to pay off. Traffic originating from search ads reached 38.3%.

As our resident Solutions Architect Keith Meagher explained in his post on Google Shopping:

These metrics…tell the story of a noticeable drop off in the evolution of text ads and ad extensions following the painful expanded text ads migration of 2016.

In 2015, Google desktop text ad spend topped $15.4 million from Black Friday to Cyber Monday, with PLA spend only coming in around $2.9 million.

Prediction 5: Small Business Will Get a Piece of the Pie, Too

For the most part everyone agrees that Black Friday weekend is a large retailers game – from massive discounts only bulk purchasing could ensure, to increased bids and budgets for paid advertising. However, small businesses have their important part to play in the retail ecosystem as well.

As Mickey Mericle, VP Marketing and Insights at Adobe expressed,

“We predict the biggest retailers with wide selections, easy shopping experiences and free shipping, to drive online holiday growth this year. Still, there is opportunity for savvy small retailers to win, specifically with mobile experiences. As revenue growth plateaus, retailers will be competing hard for customers by offering steep discounts and providing a seamless customer journey.”

Consumers are going ‘back to basics’ and seeking out authentic, satisfying relationships with the businesses they choose to support. Many have turned away from big box retailers (i.e. the failure of Sears, Kmart, Target Canada, Toys R Us, and the list goes on) and turned back to local businesses who can satisfy their ideal customer experience – no matter the size of the business.

The same is true for holiday shoppers. While the Walmarts of the world will do just fine on Black Friday weekend, small businesses have just as much to gain if they offer reasonable discounts and a seamless, personalized customer experience both online and offline. A recent NRF study stated that 76% of shoppers said they plan to shop on the weekend in order to support Small Business Saturday.

Whether you’ll be putting the finishing touches on your last minute campaigns, frantically clawing over a display of discounted iPhone Xs, or relaxing with a piece of sweet homemade pumpkin pie this holiday weekend – we wish you good luck! Happy Thanksgiving!