Marketers and business owners often struggle trying to decide how much to pay and ultimately what to bid when advertising on Facebook. With the number of Facebook users around the world growing every year, marketers need to understand how much they should be paying for ads to have profitable campaigns. We covered this topic in detail in our Guide to Facebook Advertising Success, created in partnership with Vector Media Group, but we still hear about it a lot, so we wanted to unpack it on the blog for our readers.

Similar to the paid search environment, Facebook is an auction based on bidding. Bids on the Facebook platform are measured using Cost-Per-Click (CPC) and Cost-Per-Thousand Impressions (CPM).

Marketers like most of us typically like to pay only for results (when people are actually clicking on their ads), so CPC is more familiar; however, in the case of Facebook advertising it actually costs more to bid this way. Bidding on ads based on CPC is more expensive than bidding based on CPM. That’s because “CPC gets converted to CPM like in the Google Display Network and marketers therefore have to outbid their competitor’s CPM for their ads to show,” says Vector Media Group Co-Founder, Lee Goldberg.

He has been most successful bidding based on optimized CPM. He explained that since ads set-up this way will show more often, he is able to gather data more rapidly and make conclusions about the data faster than with CPC. However he clarifies that creating an ad campaign on Facebook and bidding based on CPC can make sense for direct response campaigns.

You don’t know who is low hanging fruit when setting up an audience for your Facebook ad campaign unless you get to know them beforehand. Getting to know your audience involves a bit of data collection and past marketing campaigns can help. For example any list that you’ve created about your customers can be uploaded to Facebook so you can reach these people with your ads. For example, you could create a list of people who saw your paid search ad on Google and actually converted into a sale. You could retarget these folks on Facebook as a custom audience and increase your bid on them, knowing they’ve already bought from you and try to get another sale with them.

Similarly, Facebook is awesome for allowing marketers to develop what’s known as a “lookalike audience.” This feature means marketers can instantly create a larger group of potential buyers who will see their ad, who have the exact same profile (demographics, interest, location potentially etc.)  on Facebook as those who bought from them in the past. Ad campaigns targeting lookalike audiences should also have a higher bid. Again, whenever there is a higher potential for conversion there should be a higher bid.

If however you’re starting new and fresh without past marketing campaign data and custom audience lists to work from, custom rules for bidding can help. “For example, a campaign manager could create a custom rule that if an ad set has more than 2 conversions and a CPC lower than $1.75, they will automatically increase the budget to bid more aggressively. Similarly if that ad set has a really low CTR we can create a rule to pause these ads and save their budget for the ads that are getting clicks.”

Ads can be placed in a person’s newsfeed on Facebook, on the right-hand side of the page (right-hand-rail) and now ads can even be placed inside Facebook Messenger! 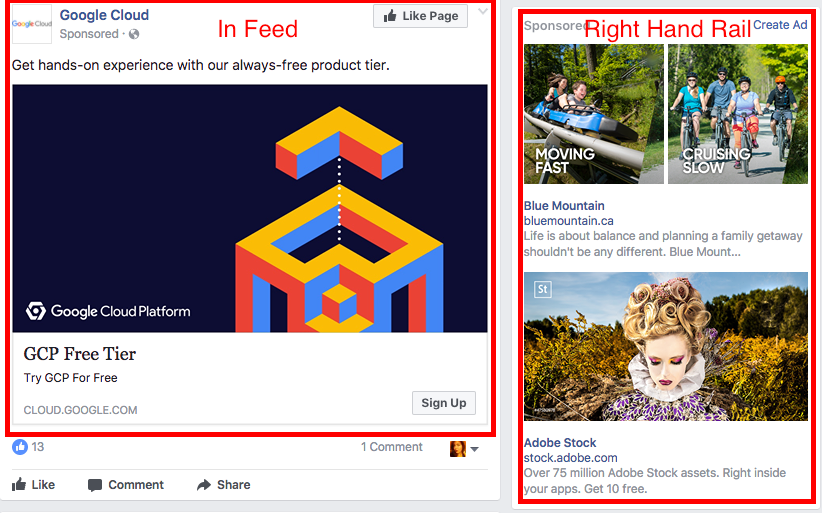 Marketers who are advertising on Facebook have to be prepared to allocate different bids for different ad placements. According to the years of Facebook advertising experience of Vector Media Group, right-hand-rail placements don’t get a lot of clicks but they do get a lot of conversions. That means that while their CTR is low, those that do click on that ad tend to convert better than other placements. If this is the type of ad placement data that’s coming out of a campaign, then it doesn’t make sense to set up bids based on cost-per-thousand-impressions (CPM). From this logic, marketers have to set their bids according to performance.

Bids Are About Logic

While knowing a few basic things about Facebook bidding can help you get started, getting smart about your strategy will take your ad campaign the farthest. Knowing your audience is key here. When you understand your audience and have it segmented based on where they are in the funnel, it’s easy to make informed decisions about what to bid. The logic is always, the further down the sales funnel that person or group is, the more you should be bidding on them.