Controversy — or at least media hype — is currently swelling around how much political campaigns and organizations used Facebook ads and other social sites to influence voters in the most recent presidential election. Whether or not ethical lines were crossed may still be up in the air (and, in some cases, many have agreed that they were), but the truth remains that social ads and marketing are available to any customer, just as television ads are. While pundits may argue about the political ethics of such tactics, social marketers should at least take note of both the successes and failures these campaigns have experienced.

$72 million was spent on Facebook advertising between the Trump and Clinton campaigns during a 5 month campaigning period in 2016. If presidential campaigns are spending millions on Facebook there’s probably a valuable return to be had.

Here are three lessons social marketers can take from the controversies and successes of political Facebook marketing.

Reports are that Mark Zuckerberg, Facebook CEO, put in a call to President Trump following the close of the last presidential election. The internet hit overdrive as people analyzed the reasons for this reported call: was Zuckerberg showing support for a political candidate? Glaser says the more likely reason for such a call was business — the Trump campaign was a huge ad client for the social platform, and business owners and leaders know that loyal customers and high spenders get white glove treatment. That includes the occasional congratulatory phone call.

Whatever you believe about this reported call between social media CEO and the Commander in Chief, it does highlight a point that can be easy to forget – Facebook is a business. It has advertising policies that it enforces, and successful Facebook ad campaigns play within the bounds of those policies, even if they do it cleverly. 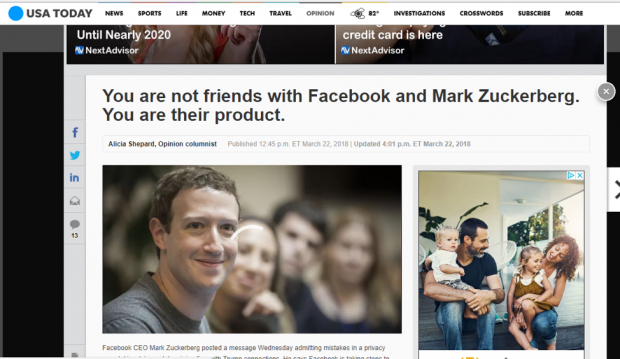 As a business, Facebook is going to do what is best for its own longevity and its shareholders most of the time. And while advertising revenue is important to the platform, even a single presidential candidate with a million dollars in marketing spend isn’t as important as protecting the business itself. That means smaller marketers and Facebook users are unlikely to get “top billing” when it comes to Facebook’s decisions.

One reason Facebook put ad dollars before user privacy was because it thought that was what was best for its shareholders. Perhaps another lesson from Facebook’s foray into politics is that even giants make mistakes. Quarterly earnings reports released a few weeks ago show negative growth for the first time, causing Facebook stock to plummet — also a first since the company went public.

Marketers can draw two lessons from these narratives. First, the backlash against Facebook’s business activity could be like a canary in a coal mine. Couple this news with the implementation of General Data Protection Regulation in 2018, and you might see early warning signs of even stricter marketing parameters on platforms that have been most successful for advertisers, including Facebook.

Second, even before any changes occur, Facebook still operates as a business and has plenty of parameters for marketers to follow. For example, it has a list of 29 types of products and content that are prohibited from appearing in ads and a dozen more areas that are heavily restricted. It also has policies on how data can be used and collected in the course of advertising and exactly how you need to format and position various types of ads. You can’t treat Facebook like a friend you’re sharing information with; it’s a business.

2. Transparency is a Wise Choice

Consumer trust in online advertising has always been fickle, and political use of Facebook has caused general trust to take another hit. Almost 60 percent of individuals in the United States report an association between ads and fake news, and 43% of Americans in a recent study said they’d previously had a “bad experience” with an online ad.

Whatever your previous use of social advertising, you’ll have to work harder in the future to gain consumer loyalty and trust via these methods simply because of these perceptions (and potentially a few bad eggs). That makes transparency incredibly important, especially when you’re dealing with things like native ads that may at first appear to be normal posts in a user’s feed.

In 2018 and beyond, transparency isn’t really a choice. GDPR is a revolutionary step forward in protecting user data anywhere online, and Facebook itself has added transparency tools, pulling back the curtain between advertisers and users. For example, anyone is able to view all the ads being run by a Facebook Page by using one of these tools.

What does transparency in Facebook advertising mean for your organization?

The way social media — Facebook in particular — and advertisers use data is another controversy brought to the forefront in part because of political use of Facebook. CMO points to the Cambridge Analytica scandal as a learning event for all social media and online marketers. Users may feel burned by political activity on social networks, and the best way to engage them is to ensure your company’s marketing tactics are a salve of honesty and transparency.

3. Data Analysis is a Powerful Facebook Ad Tool, But Use it Wisely

Notice that the lesson isn’t “don’t use personal data.” Online marketing in its current form makes eschewing data — personal or otherwise — a death stroke for your brand, and recent political campaigns prove that targeted marketing is extremely powerful.

Political parties or those surrounding them may have misused personal data, but social marketers don’t have too. The ad targeting ability that is possible on Facebook is what makes it such a powerful tool for marketers, and Facebook makes it possible for you to use that data in appropriate ways. This is especially true now, with Facebook making changes in the wake of its own scandals to better protect users while continuing to support marketers.

Whether you leverage the power of Facebook ads or use targeting data in off-platform campaigns, here are some tips for marketing within ethical lines: